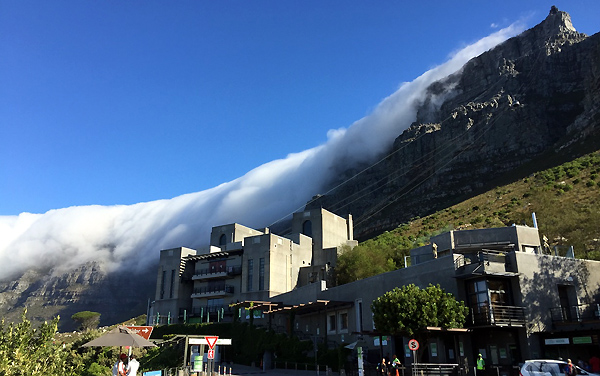 So I’ve been in Cape Town since last Saturday, and it’s rained every day. Every day it’s been so cloudy, cold and overcast that going up Table Mountain was out of the question.

So Wednesday was when my tour officially began, and it offically was to begin with Table Mountain! I woke early and threw open my room curtains and there it was: in a luminous pastel predawn blue sky without a cloud in the heavens!

Off the 16 of us went dashing through busy Cape Town in a race with a hundred other tour buses filled with guests who had to reschedule their few days so that at the first clear chance they could make it up the mountain.

We got there at the very reasonable hour of 830a. (The funicular begins at 800a.) Still, I had to wait 20 minutes in line for tickets and then all of us waited about 40 minutes in a line to board the funicular. As we boarded, the ticket line had grown to an hour and the funicular line also to another hour!

When we queued up the sky was perfectly clear. When we boarded the funicular, clouds were forming, and 7 minutes later as we exited the funicular the mountain was clouded over!

The temperature was 42F. You could hardly see your feet. But we persevered and bumped into a rock dassie or two, enjoyed the ericas and proteas and gorgeous lichens and for some of us we were at the right spot at the right moment when the Table Mountain table cloth cleared momentarily for a deep few down to the sea!

(That’s the way it goes, and the next day for the entire day the mountain was wrapped in cloud!)

Spirits of the group remain high. When we descended the mountain we fell into sunshine that covered the entire Cape… except Table Mountain. So we had an absolutely scrumpish day at Groot Constantia and in Kirstenbosch, where all the wild flowers were in bloom!

Kirstenbosch was bright, cool but not cold and laden with color. It was one of the best times I’ve ever been there!

Then today we walked the Company’s Garden as I explained the complex, dynamic and deep history of the country using the garden’s memorials and monumnents, toured Slave Lodge and then descended on Green Market Square’s flea market before a typical Malay lunch at the famous Kombius restaurant in Bo-Kaap.

And with a few hours remaining, this group wasted no time going back to the phenomenal new Museum of Modern African Arts.

An amazing time we’ve had in The Cape. Tomorrow we visit the Cape of Good Hope and end up for two more nights in the wine country. Stay tuned!