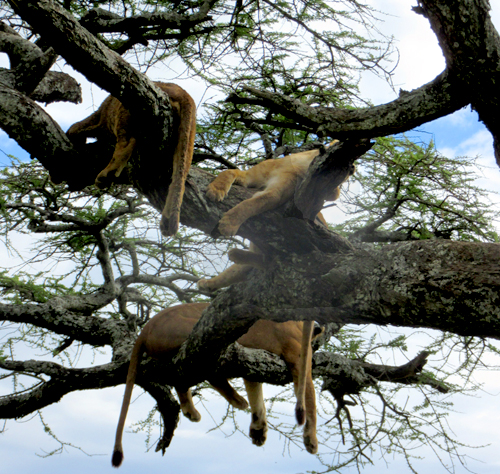 Our last two days of game viewing in the central Serengeti were fabulous! Lion hunts, five leopards, rare birds and some of the most magnificent scenery on earth!

We left Ndutu and headed for the Moru Kopjes. This is the prettiest place in the Serengeti, with lovely small bush forests and meadows nestling giant granite kopjes that sculpt all sorts of shapes and sizes into the landscape.

My principal object in going is to visit two sacred Maasai sites: the cave paintings where newly initiated warriors are instructed by the outgoing warriors of their tasks and responsibilities, and Ngong Singing Rock, the legendary place that Bernard Gzimak convinced Maasai residents to leave much of what is now the Serengeti in 1972.

We did that, and it’s both heart-breaking and hopeful to hear the tales that grew the Serengeti at the expense of Maasailand.

But we also saw a rhino in the Moru! Now that’s something, because truly wild black rhino are about as rare a wilderness event outside of the Ngorongoro Crater that anyone can have, today.

And in the Moru we saw ten lions in two trees! It was actually quite hilarious and was right on the main Sopa road off the main Seronera road just after entering the Moru. The family had obviously finished off a pretty significant kill, because every one of their bellies was big.

After a lion kills and feasts (often increasing body weight by a quarter to a third) it has to flood itself with water. I can only imagine how painful that must be. Then the lion starts to hyperventilate. Besides running down a zebra at break-neck speeds, digesting hunks of unchewed meat is the hardest thing a lion body has to do!

Then, it tries to sleep. In this case, ten of them were flung about two trees on opposite sides of the road, all looking terribly uncomfortable. It was hard to position the belly so that it didn’t pull them off the branch, and once positioned, the rapid breathing made the branches move up and down as if the tree were alive!

In our last two days in the Serengeti we also saw five leopard. I hesitate to say this, because I guide many safaris to many of the same places where we never see a single leopard!

We also watched a lion hunt from start to finish and racked up more than 30 lions in three days of game viewing. For all you prospective first-timers to Africa, beware: that’s very unusual.

I think you can figure out by now that this was an extraordinarily successful safari, and I’m pressing myself to figure out why.

There’s no question that luck has a lot to do with it. But I know for certain from this group that client attitudes might be just as important.

We averaged 10-12 hours of game viewing each day. When I say that, I get myself tired, but we didn’t feel tired at the time. Everyone was so enthusiastic and the wilderness and its magnificent animals so beckoning. This is my favorite time of the year, when the rains that began at the beginning of the year get properly organized.

So the veld is so incredibly beautiful. The skies, especially at sunset, are so heart-thumpinginly magnificent. And the dramatic, loud and powerful storms disrupt hardly a couple hours of the day, a break normally at lunch time that we really need.

There are baby animals everywhere. We found one group of female wildebeest and it seemed like virtually every one had a calve! We saw baby giraffe that looked at us with as much curiosity as we had looking at them, and cheetah cubs hardly a couple weeks old that walked up to our vehicle almost meowing!

The Serengeti is my favorite place in the world and it lived up to every hope and demanding expectation I had for this marvelous group of people traveling with me.