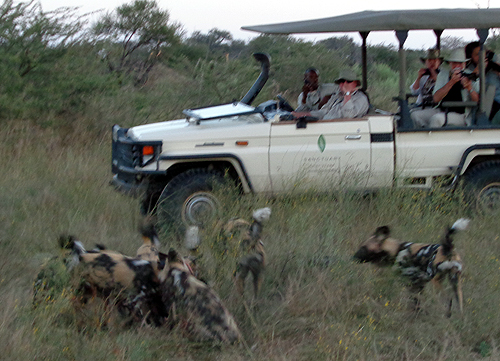 Our final game drive in Botswana ended with a wild dog kill!

The story of wild dogs is one of the most hopeful, positive stories of the African wildernesses! And for us to have experienced it was a totally unexpected bonus to a great safari in Botswana!

It’s a bane of leading a safari when the trip is winding down and some of the expectations for animal sightings haven’t been met. I’m personally very philosophical about it, and I hope I convey that calm obviousness to my clients, and frankly, I think most of my clients accept it.

But to be sure the bulk of tourists to Africa don’t. They have a checklist to be compared with the friends who recommended they go in the first place, and a competition of successful vacation planning that seems to drive so much American tourism.

And the driver/guides know this well, because they are dependent upon their tips. Find a leopard, and the tip is 50% higher. Maybe it shouldn’t be that way, but that’s the way it is.

And so in my own case it means trying to convey to the driver/guides that my clients aren’t normal; they understand luck in a way a normal tourist might not. With my own drivers in Tanzania I’ve successfully conveyed it, but elsewhere I’ve never wholly achieved that goal.

And so for three hours we bushwacked through Botswana looking for a leopard and seeing nothing else.

Then as the light was falling and no leopard had been found, we raced to the sundowners being set up by one of the three drivers at a pond’s edge.

And as we just came in view of them, I saw the dog.

It was classic. Every wild dog family today is somewhere between 10 and 25 individuals if there are juveniles. The family is composed of the alpha female and male, perhaps several of the males siblings or cousins, and the juveniles.

We arrived on the scene with 9 juvenile dogs strung all over the place and impala snorting and pronking and prancing in every which direction. This is typical. The hunt normally begins at sunrise or sunset (except when there’s a full or almost full moon, then maybe at night, too), and the juveniles are the ones who begin the hunt.

Most all of the time the prey is impala.

And right after beginning the assault, the juveniles get kicked to near smithereens. I immediately saw two juveniles limping. One had his right foreleg dislocated and the other was limping on his right rear leg.

The impala scatter helter skelter freaking out. The alpha female or male then chooses a target individual and chases it up to speeds of 40 mph (twice the speed of an impala) and brings it down. That we didn’t see.

The alpha adult then lets out a single high-pitched hoot. We didn’t hear that, but we immediately saw the reaction: The 9 juveniles immediately perked up and began running in near formation towards the call of victory.

The alpha female came out of the bush and met them at the edge of a pond and regurgitated a bit of the proof that the impala was down.

They all got instantly hyper, defecating and jumping in the water, raising their tails, prostrating themselves to each other, whining in a hectic, frantic 15 or 20 seconds of celebration before then all running off back to the kill.

We followed through the bush and there the alpha male was eating, but he stopped to let the younger of the family consume what was left of the impala.

Literally in two minutes it was all gone. And it was nearly dark. Likely they would do it all over again before complete darkness, since it was hardly enough, but we had to go.

What an extraordinary way for us to end a fabulous safari in Botswana!