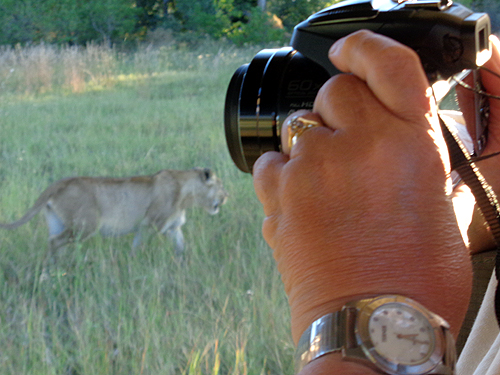 It isn’t just game viewing, it’s the extended stories about what you’re seeing that make the wilderness so fascinating.

As expected our best big game viewing in Botswana occurred in the Moremi Game Reserve, for us on Chief’s Island. On our first game drive we encountered a lion kill of a smallish female buffalo.

There were three mature lionesses on the kill with one squealing cub that couldn’t have been more than 2½-3 weeks old. That in itself was interesting, since lion litters are routinely 5-7 cubs of which usually 4 survive for at least a month; plus the fact that normally mothers won’t display their cubs at quite this young an age.

But there was only one cub, and when we arrived all three lionesses were leaving the kill to water, and the poor cub was squealing louder than a pig at slaughter. As the lionesses lumbered through the grass, their distended bellies slowing their gate, the poor cub was jumping madly after them while falling behind.

The mother didn’t seem to care. It was clear which was the mother, since her mammary glands were bursting at the seams: an indication that she’d lost all the others in the litter already, and a further caution that the poor remaining cub could be endangered by her producing too much milk. 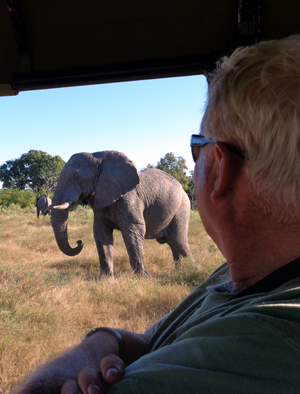 Later she’d try to nurse the cub, but he was as round as balloon and had obviously already had his fill. In such a situation, her glands might infect.

Finally the cub just couldn’t keep up. He turned back into a nearby forest and toned down his whining. The females proceeded to a puddle of a waterhole, probably dug by an elephant, and drank their hearts out.

The cub started to squeal, again, and as the mother got her necessary fill of water, she perked up to listen to him. Either she was sated with water or anxiety, and left the other two lionesses to find her cub and bring him back to the kill.

Several times she tried to pick him up as lions routinely do, but for some reason she’d drop him after just a few short instants. I don’t think it was anything he was doing, because once in his mother’s mouth he went totally limp as cubs are wont to do.

And why she was bringing him back to the kill was another mystery. He was far too young to eat, and the kill was an invitation for battle. The lionesses had carefully buried the intestines in sand to reduce the smell, and they’d pulled the carcass into a bush, but the vultures on the trees were proof their treasure had already been discovered.

At the kill the little tyke rubbed and rolled all over mom, but despite her attempts to get him to nurse, again, he was just too full.

Finally the mother lioness got too nervous and disappeared into the forest with her cub, and the whining stopped.

The background supplied to us by the Chief’s Camp drivers helped enormously to understand exactly what was going on.

The three lionesses were two daughters of one mother, and they had never successfully reared cubs. The daughters were about 4 years old, so that in itself was unusual.

The three were constantly harassed by the males in the area. The current pridemasters, two younger males who we never saw and were reported to be “patrolling” the perimeters of their territory and were unaware of the buffalo kill, had dislodged a single pride master several years ago and killed four of his cubs.

This is common lion behavior: a new pridemaster kills all the cubs of the previous pridemaster.

The current little cub was from the first litter sired by one of the new pridemasters, but one of the guides felt that one of the pridemasters might kill the cub (and might have killed the cub’s siblings already) because he was not the specific one who sired him.

That’s interesting but as far as I know undocumented behavior. Multiple pridemasters are almost always brothers or cousins from the same family, and if the theory of natural selection which explains pridemasters killing cubs really governs behavior, then they would be close enough genetically to accept each other’s progeny.

The first successfully raised litter is always the most challenging for the mother lion. It could be that multiple conditions, including the unnatural floods of the last several years as well as the constant male harassment, just rattled the young mom too much.

On the second day we saw the lionesses finish off the carcass. Killing a buffalo is no small feat even for three lionesses, and their still raw wounds attested to that. But since the pridemasters never found the kill, the females gorged themselves to their hearts content.

We left the scene with the rollie pollie little cub feisty and healthy. But I know his chances of survival aren’t good, given the stress filled scene we’d been so lucky to explore these last few days. 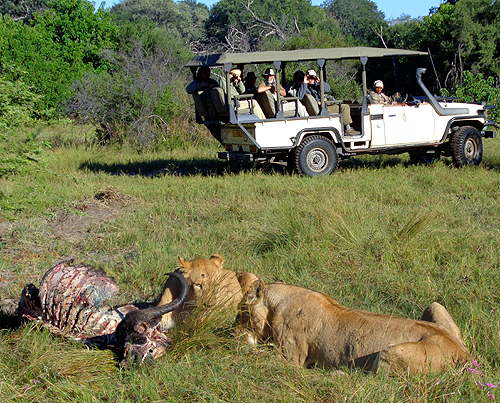