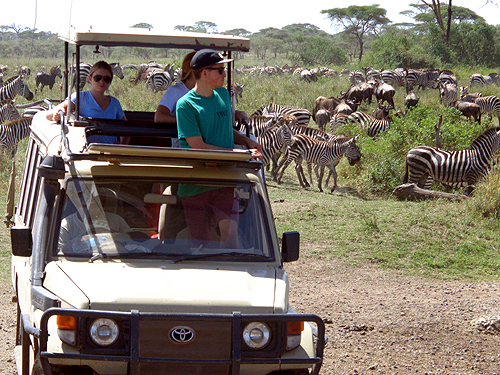 At Seronera for two days we were engulfed by part of the wildebeest migration, something totally unexpected.

Historically the wildebeest would be much further north by late June/early July, and the reports out of Kenya were that they were. In fact, the crossing of the Sand River from Tanzania to Kenya was reported in early May.

But here we were, 120 miles further south, surrounded by wildebeest and zebra day and night. The saturation of the herds on the veld extended from just south of our camp at the northern end of Rongai, just south of Mawe Meupe and north to the western corridor junction road.

It’s very hard to estimate the numbers but I’d guess between 50,000 and 100,000 animals, or about one-fiftieth to one-twenty-fifth of the entire population of zebra and wildebeest in the Serengeti/Ngorongoro/Mara ecosystem. Where were the others, the 2+ million? 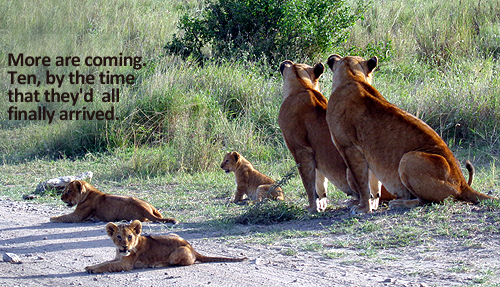 All accounts suggested they were well into Kenya and that they had moved there quickly and densely through the eastern edge of the Serengeti. But numbers like this are hard to grasp, particularly if the veld is the least broken by hills or forests.

In effect that small fraction of the wildebeest was a grand migration for us, and it wasn’t at all expected. Late and heavy rains has made the entire veld from Seronera north green. On our charter flight today to the border with Kenya, there was hardly a piece of land that wasn’t green.

Unlike birds, animal migrations are triggered strictly by food. If the food source is good, as it apparently was for the tale end of the great migration this year, they will linger and stay behind.

During our two days in the area we also saw two dozen lion, a hundred or more elephant, a leopard with a new kill in a tree, countless hyaena and many defassa waterbuck and hartebeest. We traveled south into the Moru Kopjes and saw little game but enjoyed the sacred stories of the Maasai at Ngong Rock and the morani cave paintings.

Seronera has always been an exceptional place for game viewing, but as a tourist you’ll pay handsomely for it, and not in dollars. It’s very crowded. At each sighting of a lion or leopard there could easily be 20 cars.

We have enjoyed a safari so far in remote and beautiful places with good game viewing and very few other cars. But it’s impossible to do this in Seronera, and I personally feel Seronera should not be missed.

The wilderness today in Africa has been saved by tourism. Seronera represents a core of intense game viewing with a multitude of accommodation alternatives. One positive way to look at it is that no one would have the opportunity of visiting any part of the Serengeti if the revenue received from visitors going to Seronera weren’t included.

The Seronera river valley is where we saw a dramatic half hour scene of 3-400 zebra cautiously drinking from the river then exploding out when the least sign of danger was sensed. Only here in the central Serengeti is a river system large enough to attract so many resident animals.

It’s also a reality check. Lion ignore us in the remote Kusini Plains where there’s no other vehicles but our own. But they come from generations of animals that have been habituated to cars, principally in places like Seronera.

So I wouldn’t exclude Seronera from an itinerary, and that attitude is what allowed us to truly experience the great migration when it had neither been expected or promised. That was luck, certainly explained in part by climate change, but mostly by where the extended rains fell.

And it seemed they fell right on our camp just before we arrived!

Stay tuned! On to the great Serengeti North! 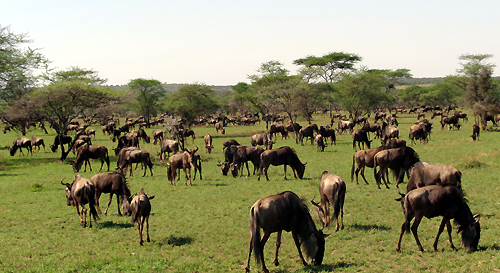