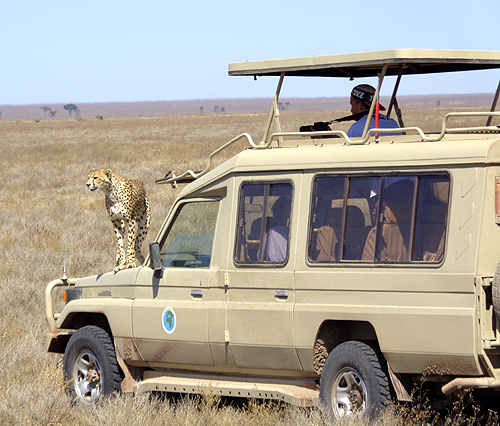 A terrific dust storm swooped down from the crater highlands onto the Serengeti aborting our plans to visit a number of sights on the southeastern plains.

One of my personally most favorite days on safari is when we leave Ngorongoro for the Serengeti. Whether it’s during the rainy season when we’ll travel through hundreds of thousands of animals, or the dry season when the dusty plains reveal fascinating secrets, it’s hard to beat.

I normally stop just after the crater rim to demonstrate the symbiotic evolution of the giraffe and the whistling thorn tree, then my exciting lecture on early man at Olduvai Gorge, then the mysterious walking hills of the Shifting Sands.

And then the immense seemingly endless Lemuta plains with views you can’t imagine.

So yesterday we struggled out of the cars on the crater rim walking to a grove of whistling thorns against a gale force wind. It wasn’t just that it was cold, it was so strong.

When we arrived shortly thereafter at Olduvai I knew I’d have to rethink the day. The wind was at least 40mph and the dust was obscuring everything. The gorge and the museum were packed solid with visitors, so we decided to leave early.

At Shifting Sands the dust was so bad that Sophi and Hadley, the two teenage girls, wouldn’t leave the vehicles, and that was my sign that the day had to be replaced.

It wasn’t that I was worried we’d get lost in the dust, but there were no views, and it was near impossible to open your mouth without being filled with dust no matter what direction you turned.

So we turned back to the main road and regrouped. It was tough to give the day up, because the storm ended at the main road, confined it seemed to the eastern half of the Serengeti. But we continued to our lodge at Ndutu, arriving 5 hours early but to a very welcoming staff, clear air and cold beer!

On the impromptu afternoon game drive we saw the Masek pride of lions which included three sets of cubs, the youngest about six weeks old. I really wonder in this start of the dry season if those cubs will make it.

We then watched a puff adder wiggle across the entire lake bed of Masek! It was accompanied by double-banded coursers and an immature augur buzzard I presume making sure it didn’t go astray.

This morning we headed out to find cheetah, and boy did we! Two young adult brothers gave us every angle of pose and then jumped on the car where the kids were! College sophomore Jeffrey was right up there popped through the raised roof to photograph its every whisker!

“Good Godfrey!” Grandpa Mark exclaimed. “It can’t get better than this!”

We then watched a larger female cheetah on a failed hunt of Thompson’s gazelle. Only about 20% of cat hunts are successful, but even so it was exciting.

It’s extremely dry around Ndutu where we currently are. On our trek to Hidden Valley I was surprised there wasn’t a drop of water left. And yet the grasses are still a little bit green. It must be the dry, cold wind.

We now head north for two nights in the central Serengeti before two nights in the far north, where I expect it will be greener and filled with animals. So stay tuned! But I’m leaving internet availability so it may be several extra days before I can let you know what happened. 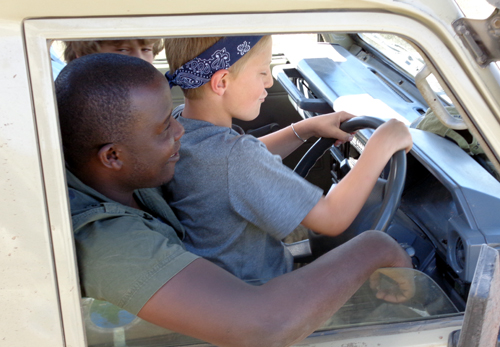