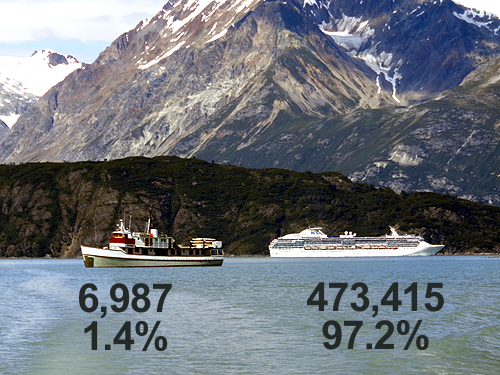 Is it moral or fair that only a tiny percentage of people can experience the Serengeti or Glacier Bay?

The question applies to all great protected areas, where taxpayer resources are used for management.

Devil’s advocates point to the huge tracts of earth still unregulated, open to anyone who dares to enter. Just flying today from Juneau to Seattle, or earlier from Chicago to Fairbanks, reveals uncountable square miles of Mother Earth plastered with nothing but trees, interrupted by giant snow-covered peaks, separated by raging rivers and massive lakes. 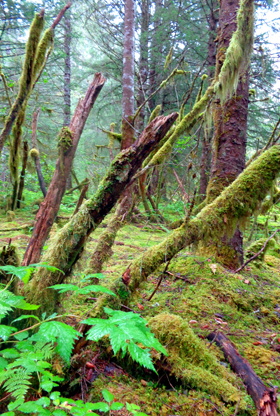 A lot of Africa is still open land. Anybody can explore these areas, right?

No, it takes more resources to cross Kenya’s northern frontier or transect the Yukon than to visit Samburu or Glacier Bay parks for a day. The great remote and untouched parts of earth aren’t really any more accessible than our protected areas.

Preserving original wilderness is a no brainer. The human is no more a creation than a tree. The mysteries that created both are hardly annotated in full. Tampering much less eliminating wildernesses jeopardizes our own survival.

We know that biodiversity is critical to our health. We know that the air we breathe, the food we eat, many of the medicines we use are natural products of the wilderness.

Protecting these so scientists can better understand their ecology should be an unchallenged responsibility.

But what about wilderness as recreation? Or as an educational or spiritual experience for the rest of us common folk? Apparently we’re hard-wired to love wilderness; it’s where many people reboot and become inspired by what we feel is its beauty. 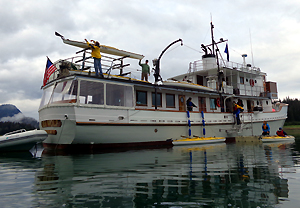 My little camera photo above of the yacht we used last week in Glacier Bay National Park, floating five miles in front of a giant 4000-passenger cruise ship represents the angst but also the success of American national parks.

Our beautiful 12-passenger, six-cabin adventure yacht carried a zodiac, kayaks and a wonderful cook and professional naturalist. The 91-foot, 12-foot draft vessel let us move into the tiny fjords of the park, sit close to calving glaciers and get remarkably close to wildlife.

Our experience thrust us much deeper into the wilderness than the cruise ship passengers that bring more than 97% of the people into the park.

We were immersed in this wonderland. But we represent less than 1½% of the visitors to this 3½ million acres of protected wilderness.

Similarly I think of my own guided safaris into remote wildernesses in Africa.

Over the last decade between 150 – 200,000 people annually visit the Serengeti. But less than a few hundred travel into the remote places I take people, like the Lemuta Plains or southern Manyara.

My guiding obviously provides considerably more depth and insight than for the 97+% of other visitors. Just like our experience now in Glacier Bay.

Does than make me, and my clients, decadent and arrogant? Simply because we can afford to pay so much more?

Yes. You just can’t get around this. You can provide pro-bono services, raise funds for not-for-profits that bring the under-privileged into the wilderness, but in the end the percentages change insignificantly.

One of the most cited critics of national parks, Canadian Lisa Campbell explains:

“White people are much more likely to engage in public parks than people of colour.

“Being able to retreat from the city is a luxury that few working class people of colour have the privilege to afford. On top of this history of exclusion and colonial discourse, National Parks cater to the status quo by providing history from the winner’s perspective, and excluding intercultural dialog.”

But at least in America I think we’re trying to mitigate this exclusivity of the wilderness to the elite. At the turn of the last century, American national parks commissioned a lengthy study to create a fairer mission for the 21st century.

“Rethinking the National Parks” concluded a more generous posture to the native Americans who first lived there, and to the rest of Americans who want to visit.

(Contrast that with recent new forced resettling of Maasai from Serengeti areas, quite against their desires.)

And that 21st Century mission of the National Parks increases access for those who can’t afford the more in-depth experiences or resource rich outfitting by building more roads, reducing some fees and providing more free literature, and – specifically in the case of Glacier Bay where we just visited – increasing large cruise ship availability.

Seven-day cruises are available into the park for just under $800 per person. Princess Cruise’s ships that enter Glacier Bay carry between 2 and 4,000 people. Along with other slightly more expensive lines, these ships represent more than 97% of the visitors annually into Glacier Bay.

There are many critics of this approach. More use jeopardizes wilderness, however regulated that use is. Cruise ships are notorious for running into and killing whales. Just no way you can get around that, either.

But comparing the negatives with the positives, frankly I think our national parks are doing a great job. There are plenty of us out there to scream if that changes. And right now I’m a lot more proud of the situation for all peoples in Glacier Bay than in the Serengeti. 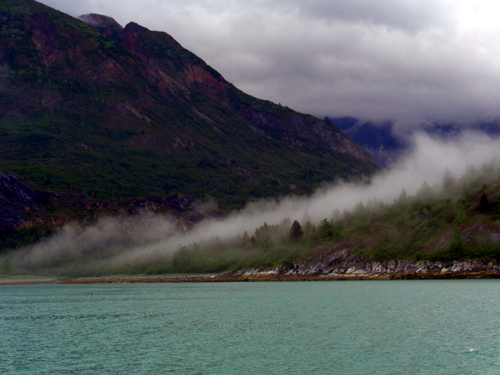