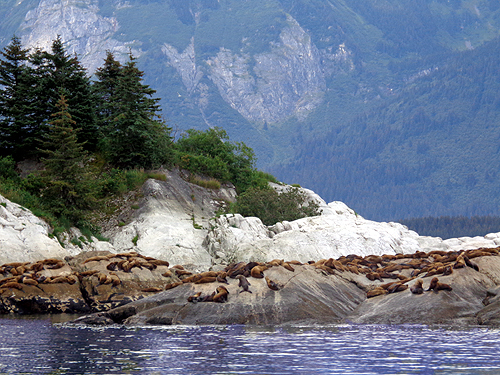 A week intimate cruising within Glacier Bay National Park on our beautiful little yacht reaffirmed all the lofty maxims of the many wonderful people who had the foresight to preserve such a treasure: our souls were refreshed!

My Alaskan safari began with The Far North in Fairbanks in the wide-opened tundras of Denali and ended in the unbelievably lush rain forests of Glacier Bay. 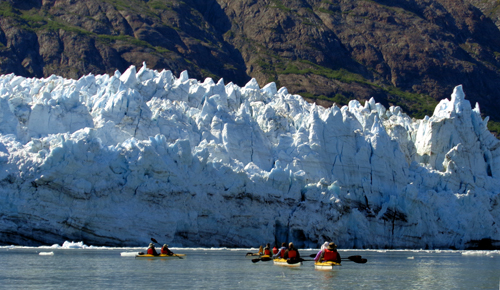 The six days private cruise began with a splash as we took our first of several kayaks. Over the course of the week we’d kayak in secret little coves among towering mountains, along intertidal cliffs laced with starfish colored like a rainbow, among icebergs crashing down from great glaciers and through literally tens of thousands of seabirds!

I can’t imagine exploring Alaska without a kayak. Even for the uninitiated, it’s simple and safe and our group chose mostly to go in two-man kayaks, although I stuck to a single one. It doesn’t take long to learn to push instead of pull, and once achieved you sail through the waters like a dolphin.

Several of our group even kayaked among humpbacks. Glacier Bay is famous for its whales, and we learned of tails of joy and misery with them. On the path leading to the dock at Bartlett Cove is the skeletal remains of “Snow,” a 40-year old whale killed by a cruise ship. Our leader, Kimberly Owen, told us numerous stories of whales including some spiritual stingers precious to the First Nation Hoonah peoples who inhabit Glacier Bay. 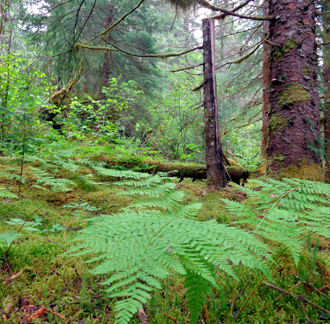 We probably saw 20 whales or more, including one group of three that just wouldn’t stop breaching! I counted a dozen breaches in less than fifteen minutes!

Every day we hiked. Some were longer and harder than others, but everyone made it and returned without sore joints! Hikes were up mountainsides, above glaciers, through rain forests, on beaches and among great pieces of ice!

We saw dozens if not hundreds of fabulous sea otters and learned about their near extinction and recovery, one of the great (and few) stories of successful wildlife reintroduction.

At one haul-out of stellar sea lions, I counted more than 750!

And we saw bears, and experienced the narrative of a four we saw on a beach that included two juveniles that just couldn’t leave Mom even as Mom was laid out on her back nursing a new cub.

Sea birds galore. Tufted and horned puffins. Marbled and Kittlitz murreletz. Even murres! Thousands and thousands of kittiwakes, and many glaucous winged gulls and oyster catchers. And of course many grand eagles. We kayaked under goofy pigeon guillemots that treated us like welcomed guests and sailed among loons and cormorants! 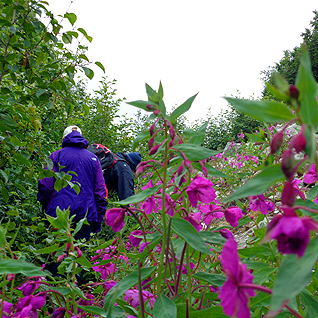 But I think the grandest wildlife experience was as we sailed beneath some steep cliffs looking for mountain goats.

We found them, high up but close enough to see clearly even without binocs. They went about the terrifying cliff edges nibbling away, and we watched a little one following mother having just learned that a large percentage are lost to slipping!

Then someone noticed a goat freezing. They’re not hyper but usually constantly on the move, if for no other reason than to maintain constant balance. But this one froze as if we’d taken a picture. 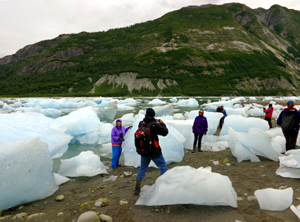 It stared in one direction and we knew something was going on. Following the goat’s line of sight, we then saw a hoary marmot racing onto the top of a rock, standing up and looking towards us, then quickly twisting around and looking away, and then racing to the left, then to the right as if it just couldn’t figure out what to do.

We sailed slowly around the tip of the peninsula and there was a wolf! Obviously what had happened was the marmot saw the wolf and freaked, then the got saw the marmot and froze. It was a wonderful example of how everything is marvelously connected!

Our trip is coming to an end. Stay tuned as we sail into our final hours!