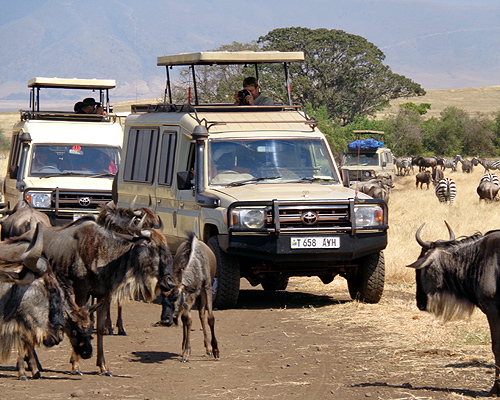 Only a few hours before Obama arrived to cheering throngs in Dar-es-Salaam, a fast cavalcade of fancy SUVs with American diplomatic plates preceded by Tanzanian police vehicles tore through the gates at Ngorongoro where we were waiting to enter.

Nobody tears through the main gate the NCA (Ngorongoro Conservation Authority). At least not until today.

There were literally dozens of people milling around, visiting the interpretative center and the bathrooms, and 20 or more vehicles parked as their drivers were methodically processing entry in the inimical Tanzanian way, which is for far too long.

And then, whiz wham! It happened so fast I can’t even remember how many vehicles there were, but at least 4 American cars and at least as many official Tanzanian ones.

Immediately the entry gate to NCA was all abuzz:

The best we could discern was that it is an advance team for someone. Obama has publically said he won’t be going on safari, but maybe one of the 800 other people in his entourage (almost all except aids and high government officials paying for themselves) will be. Maybe it will be Bush.

I haven’t seen such happy excitement in Tanzania for a long time. Everyone – no matter what their political persuasion – is on cloud nine as the President of the United States, and the first black one at that, visits the country.

I also happened coincidentally to be here when Bush came, and when Hillary and Chelsea actually visited the crater. Nowhere near the excitement of today’s.

It was a surprise for the Felsenthal Family safari, to be sure! I was worried they might close down the crater, which was our objective today, but my head driver assured me they wouldn’t. And then as the rumors settled into something more akin to wild speculation, the notion was that America’s Secretary of Commerce, John Bryson, would be coming in the next few days with his own larger entourage.

All I know is that someone important is coming to the crater.

We had a wonderful day in the crater, although it was disappointing as far as lions go. I usually see 20 or more lions, and we saw only 5. Luck of the wild, of course. But we did see some special things:

Baby hyaena denned rather boldly in a culvert right on the road hardly stirred as we watched them from a few feet away, except to occasionally play with a piece of grass. It’s absolutely amazing how instinct prevails overwhelmingly with the young animal that it wasn’t the least bit disturbed by our vehicles and cameras.

Baby gazelle act often similarly, and baby zebra sleep so soundly you can practically touch them.

We encountered lots of wildebeest and after thinking about it for some time it seemed to me that they were mostly mothers with yearlings … no current babies. That’s rather strange, unless they were late births last year.

Late births might not be strong enough to migrate as the rains end, so they have little options except to remain with their mothers and hope the rains are good enough even in the dry season to provide enough grass. 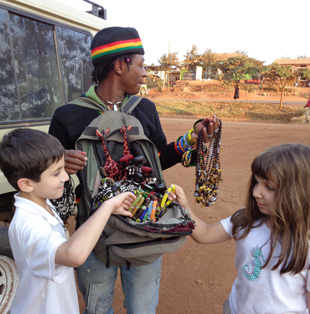 The rains last year were good enough, and there seem to be as many yearlings as you would expect to survive from an overall herd the size we saw today in the crater. And of course they would have no current babies because they wouldn’t have participated in last year’s rut.

We also got a glimpse of one of the literally handful of great tuskers still alive on the crater floor. Several dozen of them migrated into the crater during the years of heavy poaching and stayed here for the natural protection afforded by the crater.

The tusks we saw were long enough for the tips to cross each other, a truly amazing elephant of days gone bye. Each time I come to the crater I see fewer and fewer of them. Today, only this one.

On our way back Abby and Jake bartered with a street vendor in Karatu for some bracelets and wooden animal sculptures. The vendor had a smile that could light the heavens, and a genius way of portraying his wares.

Wearing a backpack in reverse, he stuffed the pockets with all sorts of things and walked around with everything at his fingertips!

Now onto the Serengeti! Stay tuned!