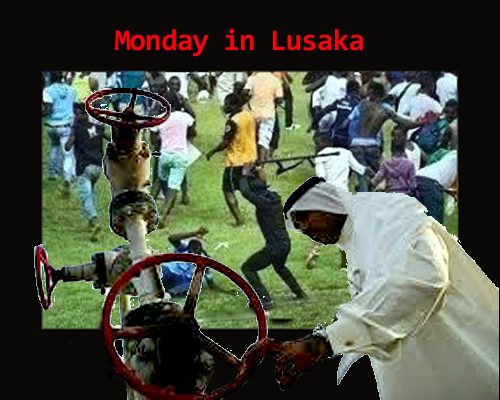 Zambia, copper giant and Zambezi River namesake, is fraying at the seams, torn by a global recession manipulated by Sandia Arabia and an educated society intoxicated by democracy.

What’s happening in Zambia today is a preview of the trouble hanging over much of developing Africa, and Zambia is in the focus just unluckily because of the unexpected death of its leader.

At 77, popular Michael Sata was right around the age of many African leaders and his health was OK. His death in October came as a surprise.

If Sata had died a year earlier before copper prices had tumbled and oil began to decline and the Eurozone started to fray, again, I doubt anything unusual would have happened. The country was doing well.

But Sata didn’t die a year earlier, he died in the early preview to a new global recession caused by the forced decline in oil prices, which has triggered a decline in commodity prices of all sorts including copper, Zambia’s one and only and very important resource.

I wrote earlier about the peculiar transition of power to a transitional government Sata’s death abroad caused: A white man, Guy Scott, became acting president but was barred from becoming president even as he oversaw the process for new elections.

Immediately fissures began in all political alliances, and yesterday violence peaked with car bombings and sporadic gun fire in the capital. Read the comments to the brief article to see how high tensions are.

This would not have happened a year ago. Yesterday alone copper prices tumbled and are now almost 10% below a year ago. The Canadian stock market sank miserably, because of copper.

“Copper [has] an uncanny ability to predict turning points in the global economy,” a Dubai asset manager wrote recently.

It isn’t that the people exploding cars or throwing rocks or issuing threats in Zambia understand the economics of global commodities, just as the new disaffection with Nairobi university students doesn’t mean every single one of them understands the mechanisms that provoked Chinese companies to stop drilling for oil in Kenya.

But everything is so intricately linked, that disaffection spreads like a virus. In Africa’s small if previously vibrant economies, a wrinkle in future outlook is a tsunami of potential misery.

President Zata died unexpectedly as the storm clouds that were gathering began to rumble. The event alone was socially disruptive to be sure, but in normal times it would not have led to the violence in the streets of Lusaka currently seen.

Zambia is one of sub-Saharan Africa’s better educated countries, and though it’s struggled with an above average amount of corruption, it should have been able to make the current power transition pretty easily.

But Sandia Arabia opened the spigots. We’re told the reason is to force America out of the top spot in world oil production. The ramifications are startling and severe.

Combined with an untimely power transition in developing Africa, it creates a maelstrom of discontent and unease.

The Zambian election process begins in earnest in a week. As copper is a barometer of the global economy, what happens in Zambia next week will foreshadow much of Africa for next year.