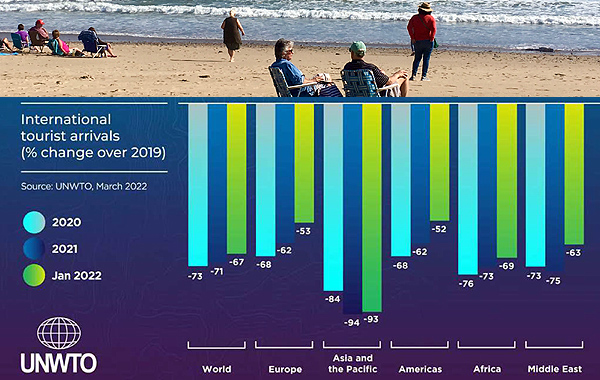 Things aren’t going well for tourism. It’s best in America where local travel has doubled over last year and is only about 15-20% below pre-pandemic levels. Europe is a close second. It’s really bad in Africa and the Middle East where current tourism is still only a third pre-pandemic levels. And the worst of all, of course, is Asia where China is learning the hard way that you can’t wipe out the virus like the Uyghurs.

Soon I return to Africa with 9 travelers, and as disappointed as I felt with the less than full safari my guys on the ground are ecstatic. At least I’m coming! Tourism in Africa isn’t anywhere near the level that was predicted, and this is leading to some very interesting stuff.

Kenya’s CapitalFM News Company reports tourism increases of about 50% monthly over the low numbers of 2021, which saw only a about a quarter more than the 2020 pandemic year. This isn’t good.

What increases there are — actually, worldwide — are being powered locally.

America’s international arrivals are still less than half pre-pandemic, but its overall tourism is nearly back to pre-pandemic levels. Anyone traveling around the U.S. today will note full planes and few rental cars available. But Americans aren’t flocking abroad as expected they would by now. They’re staying close to home.

Europeans are a little bit more positive when it comes to African tourism than Americans vis-a-vis prepandemic, but it’s still an awful situation.

Safari vendors are beginning to realize this.

Hopeful signs including increased vaccinations and actual treatments led local African vendors to predict a surge by now, when in fact in certain places like Tanzania there’s actually a decline over last year.

This has led some of the largest safari companies, like Sopa Lodges, to delay reopening their midmarket safari lodges. It’s also prompted numerous vendors to rethink the massive price increases laid on for this year and next.

Worldwide travel prices have increased about 20% from prepandemic levels, and as an average of everything from bedding to jet fuel to guide salaries, that’s huge. That prompted many vendors across the continent to raise prices a third. Often this was a combo increase, as even national parks like Tanzania’s TANAPA spiked their fees.

A couple places in Africa are sticking to their guns: Morocco, Egypt and South Africa have experienced the “best” recovery, if you can call it that. But places like Rwanda, Tanzania and Zambia are having to seriously reconsider pricing that they hoped would help them recover from the pandemic hole.

Africa has always had a weird way of responding to disasters. After 9-11 and also after the Global Recession when tourism fell through the basement, vendors simply increased their prices enough to cover their losses.

This in turn segregated the upmarket, midmarket and downmarket even further. The mid- and downmarkets took the biggest hits and that’s the reason that so many large companies like Sopa and stand-alone properties remain closed and why there was such a boom in luxury safaris.

The quarter to third increase in price by many African luxury companies doesn’t reflect underlying costs as it should. It reflects a growing profit margin which these companies believe is their safety net against future catastrophes. Unfortunately if you will the rich customer has complied.

So far. But the current statistics suggest that there are other reasons people aren’t traveling to Africa than price: Perhaps a war has something to do with it. Or the inability to wave the racing flag and call the pandemic over. Then there’s inflation.

The mix of uncomfortable news makes people hesitant to travel abroad. Hesitancy never just disappears. It fades very slowly. Slowly enough that travelers considering a far away vacation have plenty of time to scrutinize aspects of their trips they never did before. Like price.

We knew the world would be different after the pandemic but we didn’t know it would include a major war, economic and political dysfunction while actually never being considered “over.” Damn variants.