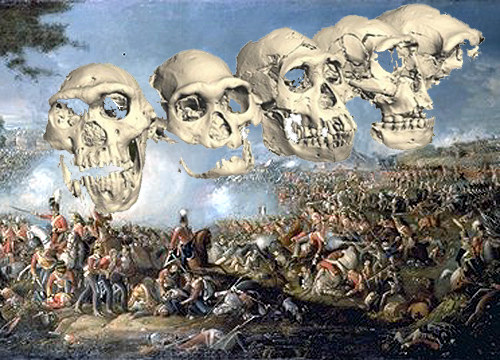 Be cautious about the headlines out this week regarding new early man finds in Georgia (former Soviet Union) suggesting there was only one species of early man.

A 1.8m-year old early hominin found in Dmanisi, by a team from the Georgian National Museum looks like “the earliest form of Homo erectus,” according to the current star of paleontology, Tim White, but was found together with four other hominin that previously would have been considered separate species.

This suggests, the Georgian team argues in this week’s Science that there was really only a single lineage of hominin and not the multiple branching lineages we’ve presumed to date.

In other words, the nearly two dozen named separate species and sub-species of early man that define current hominin paleontology is wrong, and there was only one species with great physical variation.

The Georgian team suggests the variation in physical appearance and brain size of currently living humans supports this view as well.

A number of respectable journals like National Geographic and the Economist Magazine are saying as much, too.

Be wary. Not everyone agrees. Tim White’s pronouncement at a glance of the evidence that the find is a homo erectus suggests he doesn’t believe so.

“I think they will be proved right that some of those early African fossils can reasonably join a variable Homo erectus species,” Chris Stringer told London’s Guardian. He continued:

“But Africa is a huge continent with a deep record of the earliest stages of human evolution, and there certainly seems to have been species-level diversity there prior to two million years ago. So I still doubt that all of the ‘early Homo’ fossils can reasonably be lumped into an evolving Homo erectus lineage. We need similarly complete African fossils from two to 2.5m years ago to test that idea properly.”

The recent paleontological star, American Lee Berger from the University of Witwatersrand who discovered Australopithecus sediba answered “No” to London’s Guardian’s question as to whether the Georgian find will radically alter the early man ancestral tree.

“This is a fantastic and important discovery, but I don’t think the evidence they have lives up to this broad claim they are making,” Berger continued.

I find it incredibly exciting how beautiful the now five finds from the Georgia site are, and certain in the years to come they will provide enormous science.

And maybe it’s just because for 30 years I’ve been telling my clients a story as we stand in Olduvai that could be significantly changed, if some of the more radical claims prove true, that makes me so skeptical.

But I don’t think so. Rather, I think it’s a reflection of our increasingly conservative times and scandalous media that otherwise respectable publications like NatGeo and the Economist will leap to such early conclusions.

But the notion that there weren’t multiple species of homo is not yet supported by the science, despite the attempts of the Georgian team to imply such. There is nothing yet to suggest that these finds were the same species as Homo habilis or Homo sapiens.

Ultimately, of course, it would only be the ability to analyze whatever nano traces of DNA might still be extracted from these stone fossils that could tell us for sure. The nature of fossil creation makes this highly unlikely, but I think the likelihood of such is greater than the claims currently being echoed in the popular media.

It heralds back to the epic battle of the 1980s between Donald Johanson and Richard Leakey. Johanson, discoverer of Lucy, was certain the hominin line was linear. Leakey was the champion of the multi-branching theories.

That battle ended in 2000 when Johanson conceded his mistake by writing in Time’s millennium addition why Leakey was one of the most important men of the 20th century.

So stay tuned, dear reader. And you’ll have to stay tuned for quite a long while, because while this won’t take quite as long as it did for erectus to be replaced by sapiens it’s not going to be a battle that ends soon.