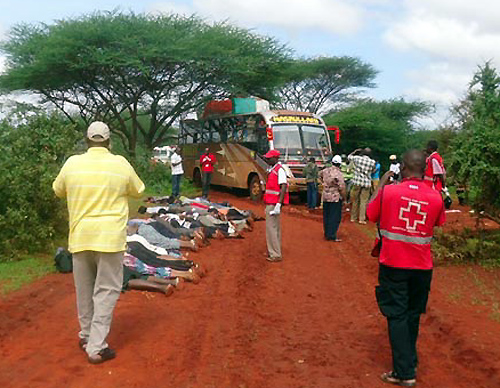 Kenya’s an eye-for-an-eye policy against terrorists is doomed from the start and will only make matters worse.

This weekend poor Kenya suffered still another horrific terrorist attack in its far northeast near the Somalia border.

A commercial bus carrying about 60 people from the town of Mandera to Nairobi was hardly 30 miles from the Somalia border when terrorists apprehended it then murdered almost half those inside who were unable to demonstrate that they were Muslim.

This makes 135 similar incidents (although most were far fewer fatalities) so far this year. Almost all of these have been in the very remote northeast corner of the country, although there have been a couple attacks in Nairobi’s Somali suburbs as well.

In my opinion security in the country is definitely improving, although it’s hard to demonstrate this after such an attack as this.

But particularly in Nairobi people are actually relaxing and feeling considerably safer.

“Al-Shabaab can no longer attack in cities like Nairobi because of enhanced security measures,” wrote a former high military official in Kenya’s main newspaper this weekend.

But that same expert went on to demand a change in current government policy and security strategy, arguing for a much tougher stand including very quick and immediate retribution.

And that seems to be exactly what happened Sunday.

In response to the 28 persons killed and single bus destroyed by al-Shabaab, Kenyan officials claimed a raid across the border into Somalia killed more than 100 terrorists, destroyed four vehicles and an armed camp.

Kenya invaded Somali in October, 2011, completing the liberation of most of the country’s main urban areas about a year ago. That has led to the first globally recognized Somali government since 1994, although the government remains very fragile. The capital city of Mogadishu, however, is definitely returning to a semblance of normalcy for the first time in a generation.

Thanks to American drones, many of the al-Shabaab leaders have been killed as well, although new ones appear immediately.

The Kenyan response of tit-for-tat isn’t going to work. It hasn’t worked since the Jewish rebels of Masada were massacred by the Romans in 1 B.C. It isn’t working for Israelis, today.

Tit-for-tat escalates violence; it absolutely has never subdued it. Advocates point to short moments in history, as many contemporary Israeli leaders have done, but five or ten years of tense peace is hardly a demonstration of efficacy.

Ethnic and religious conflict must be seen for what it really is: an easy reflection of more meaningful differences, like those of wealth and opportunity, education and health. Whether it is northern Ireland or the Basque country lazy thinkers want to explain the difficulties by ethnicity or religion.

If it weren’t wrong, then it means these conflicts must continue until one side is obliterated altogether. And that’s what drives many of their fighters, this belief that it’s do-or-die and nothing in between.

The real remedy is far more complicated and lengthy to implement. Of course, meanwhile, anxious citizens on the periphery of the actual conflict want quicker resolution.

Unfortunately, there is no quicker resolution, and believing there is only makes matters worse.