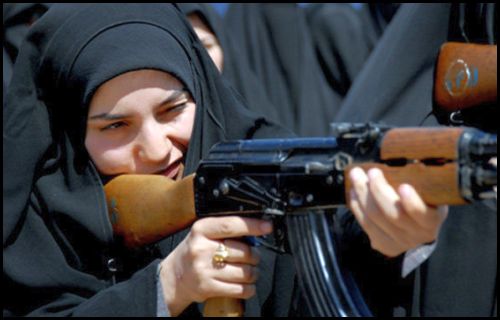 A growing number of women are becoming jihadists, especially in Africa. Why?

London’s Daily Telegraph claimed recently that one of every seven Britains who has traveled to troubled areas to join a jihadist cause is a woman.

Elizabeth Pearson of Kings College points out this is nothing new, although it appears to be growing substantially.

Ms. Pearson also points out that women are increasingly being used as suicide bombers.

Does this just provide a media advantage for jihadist groups, since media is more likely to report on terrorist acts if a woman is involved, as Ms. Pearson suggests?

The families of suicide bombers no matter their gender are often paid substantially, and jihadist leaders also perpetuate what I believe they believe is the myth that suicide in action assures martyrdom.

I actually think the main reason women are becoming more involved in jihadism is more simple. Gender abuse in America – and elsewhere in the western world – has been talked about for a very long time, but not really acted on in ways meaningful enough to reduce it.

If men want women to do something — anywhere in the world — they’re more likely able to persevere than the other way around.

Another more subtle reason may be linked to the definitely new global awareness that’s emerged recently to gender abuse. In this infant stage, this new awareness may have a polarizing effect especially upon many traditional male/female relationships.

The “put-up or shut-up” syndrome may be forcing some women — especially from less modern communities — to make a clear choice of being subservient or rebellious.

Whatever the underlying causes, it’s clear that the male/female “divide” is very easy to exploit by jihadists.

“Jihadist” is not synonymous with “Muslim” and Americans in particular don’t realize this, and this also contributes to why women are becoming increasingly involved in global terrorism.

Terrorism is successful when it clearly and completely divides its adversaries. There are good guys and bad guys, no moderate or indecisive or inconclusive guys.

America and much of the rest of the western world, especially Britain, are perfect places to overlay this ideology, because our societies have become so polarized. (Don’t think that Ted Cruz is anomalous to America. Britain, the Netherlands, France … they all have their Ted Cruz’.)

So-called modern women in Britain or the U.S. may still begin their outing in more traditional communities. Threatened and/or encouraged by liberation all around them, their communities force them into extreme choices: ostracism or submission.

Fleeing as a jihadist captures the rebellion of ostracism while still being entirely submissive. It is the ability to resist innate rights violations by, in fact, becoming a part of them.

Al Arabiya claims that British women are given the most important jihadist roles in Africa “because they [are seen as] the most committed of the foreign female fighters.”

Kamakazism and terrorism in all its forms from jihadists in the Mideast and Africa will not stop until America and its allies grow more circumspect about the real danger that exists from this jihadism.

Vilifying and exaggerating jihadist acts elevate their impact beyond reality then at the same time further divides modern societies into extreme opposites. No middle ground remains for the more traditional woman to find modern sanctuary.

Barbarism is hard to minimize. But until we acknowledge and fully embrace the fact that the barbarism of the terrorists in Nigeria is the same as the barbarism of an NFL player, we will continue encouraging the traditional woman to submit, whether that to be to abuse in an elevator or strapping herself with then detonating a gown of bombs.