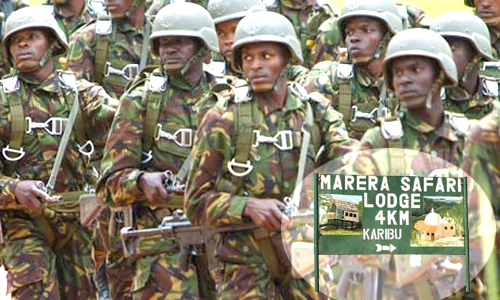 Today Kenya invaded Somalia. The speed and size of the mission surprised me and I’m sure greatly pleased Leon Panetta. It’s hard to predict the outcome, but one thing strikes me as certain: this is not a time to take a Kenyan safari.

Most news sources reported the Kenyan military operation as a response to a spat of recent kidnapings, and I don’t doubt this has something to do with it. But it could also be a partial excuse for a more globally organized effort against what appears at the moment to be a successful rout of al-Shabaab from Somalia.

The size of the Kenyan excursion is secret, but there were enough eye witness reports on the ground to confirm a major operation. The BBC and AlJazeera (who has a reporter embedded with the Kenyan forces) reported “lines of Kenyan tanks and trucks” and multiple air strikes against an al-Shabaab base about 75 miles inside Somali territory.

Africa Union forces led by Ugandan soldiers in the last several weeks have routed al-Shabaab from the Somali capital of Mogadishu. The BBC reporter Will Ross said these forces were now working in tandem with the Kenyans, moving south from the capital towards the conflict area where the Kenyans are, headed to what could be a pincer action to rid a large portion of Somali of al-Shabaab.

Last week the Obama administration sent 100 Green Berets into Uganda for deployment further west into central Africa. The statement of deployment claimed a mission totally separate from this conflict, but last night on CBS Panetta said the operation was integrated with fighting terror in Africa.

With Obama’s long list of al-Qaeda captures and kills recently, we know that the al-Qaeda/al-Shabaab power has been significantly diminished. Is this their last hurrah? Might the Ugandans, Kenyans and Americans actually be getting rid of these terrorist organizations?

I wish I felt the answer was a definitive yes, but frankly I think rather it’s a hopeful maybe. I’m no expert historian, but I just don’t see ridding any part of the world of anything, unless the people actually living there do it themselves.

And the Somalis haven’t. The parallels with Afghanistan and even Iraq are substantial. I don’t even believe that Iraq will be stable in ten years. And if I’m wrong and it is, then the question becomes was it worth the 20 years of war and investment we made to make it so?

That’s the greater, global question. But for those of us much closer to the situation, our lives and our businesses are immediately effected. Tourism must go on hold in Kenya, now, until we see what happens.

It’s been widely reported that al-Shabaab has now threatened Kenya. Last year al-Shabaab killed more than 70 people in two simultaneous bomb blasts in Kampala sports bars where patrons were watching the World Cup. They specifically threatened such before it happened because of Uganda’s lead role in the African Union forces in Mogadishu, and immediately then took responsibility. The parallel with Kenya can’t be starker.

I don’t think it will happen in Kenya. I think al-Shabaab is too much of a spent force and now too engaged outside Kenya. And Kenyan security is better than Uganda’s. So my visceral concern for my own Kenyan employees and friends is minimal.

But you don’t take a vacation where you have to keep looking over your shoulder. That’s not what a good safari is supposed to be. So while I’m not expecting trouble, the chance is more real than before, and equal if not better alternatives are available elsewhere, particularly in Tanzania.

Until the battles end and the dust settles, Kenya has become too troubled a place for tourists.