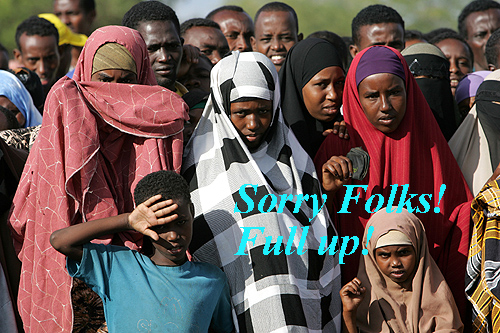 The Kenyan refugee camp at Dadaab, the largest in the world, is full. 1300 new arrivals daily from an increasing conflict in Somali are being refused services, because there’s simply no more room, no more food, no more medicines… the money has run out.

Dadaab became the largest refugee camp in the world several years ago. It lies in far northeastern Kenya along the Somalia border. The refugees have been fleeing a growing conflict between Somali warlords, the weak UN and AU supported Somali government, and al-Shabaab, al-Qaeda in the horn of Africa.

Dadaab is a city in a desert. It was built after Blackhawk Down to house 90,000 refugees as Somalia began to implode. At the end of last year, they were 350,00 refugees living there, and according to Medecins sans Frontiere, there are now 30,000 people in makeshift shelters that can’t be supported by the camp. “There is nowhere for them to stay.”

CARE, Save the Children, and Medecins sans Frontiere all confirm there are 1300 new arrivals daily in the last few weeks.

The terror of the Afghanistan Taliban, of the Cambodian Khymer Rouge, of the Cultural Revolution and the Stalin Scorched Earth Policy has come to Somalia. It’s no longer just a dysfunctional state. It’s a world crisis.

I’m not sure the world is ready for this crisis. And separated by 300 miles of desert from populated areas of Kenya, even Kenyans are ignoring it.

The situation is worsened by drought.

It all comes back to us in America. And we can’t even seem to repair ourselves.

I have never sensed such despair in my life.

When my wife and I first worked for the United Nations in Paris in the early 1970s, the agencies there were worried sick that by the end of the decade there would be a million refugees for which the UN would be responsible.

Today, the UN High Commission on Refugees takes care of more than 40 million.

That’s one-eighth of the entire population of the United States.

Nineteen American soldiers were killed in Blackhawk Down and 73 wounded. 2996 were killed in 9-11 and about 6000 others were injured. That’s about 9000 westerners killed or wounded in mired religious battles that if they hadn’t occurred would probably not have resulted in the refugee situation found today in Dadaab.

The UN estimates by year’s end there will be 450,000 refugees and wannabe refugees in Dadaab. That’s 50 for every casualty America suffered from Blackhawk Down and 9-11.