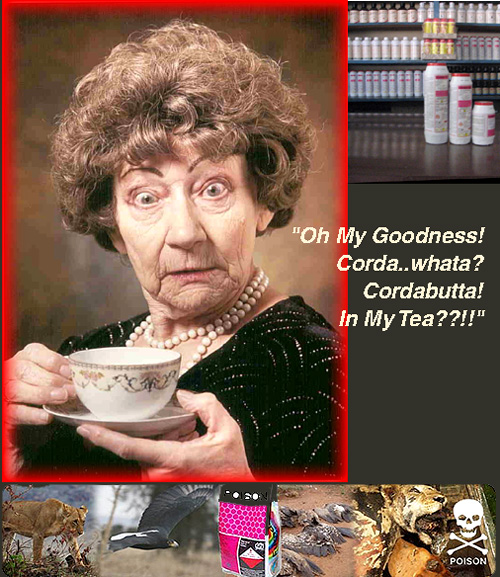 This dark circular tale starts with a motive of greed so pure that death doesn’t matter, and it ends in a dither of hypocrisies that if not so morbid would be laughable. Yes, we are proud that the EPA is once again doing its job to protect us … but at what cost? At the cost of killing in Kenya?

A U.S. corporation which is banned from selling deadly pesticides in the U.S. continues to profit from the production of that pesticide on license abroad, and from the ultimate sale of that product to East Africans. There in East Africa, it’s killing lions and people.

In 2008 the moment the EPA was released from the strangle-hold of the Bush administration, it began a series of critical restrictions and outright bans on a whole range of dangerous products that had been under production for more than a decade.

One of these was the pesticide Carbofuran which had been first produced in 1992 to combat the infestation of Japanese beatles and other aphids that were specially attacking soybean crops.

It was a dangerous number of years until the EPA regained enough resources under the Obama administration to ban it outright in 2008.

Numerous reports of U.S. farm worker illnesses and deaths from Carbofuran had been documented. But because the EPA and other regulatory agencies had been so emasculated by the Bush Administration, federal documentation was almost nonexistent.

But state documentation was striking. In California alone more than 77 workers were documented with serious Carbofuran illnesses.

FMC Corporation was the main producer of Carbofuran by 2002. It had either filed for most of the patents or bought them from other companies.

As more and more states independently began to restrict the chemical’s use, FMC looked abroad. Even after the EPA formally banned the product in 2008 and the Supreme Court denied FMC’s appeals in 2009, FMC could continue selling the deadly powder abroad.

It did this directly, but that was bad PR and risked further law suits simply from workers who would be packaging it in the U.S. So instead it licensed the product to a number of willing partners, including China’s Jiangsu Hopery Chemical Co., and that’s the company that continues to sell it to East Africa on license from FMC. In Kenya its main distributor is now Juanco Ltd.

In 2009 reports began to service in Kenya of the awful power of the pesticide, and more importantly, that it was available over-the-counter and was obviously not being used to kill aphids on soy beans. There is very little soy bean production in Kenya.

Children died. What was apparent was that the pesticide had been so successfully marketed in Kenya by Jiangsu, and was so relatively cheap, that small farmers were using it for everything possible, even when it was not particularly effective.

But the misuse of Carbofuran in Kenya drew world attention when Wildlife Direct reported that Maasai near the Mara were using Carbofuran to kill lions.

(Irony upon irony, eh? A kid dying doesn’t make local headlines, but Sixty Minutes finds a story when it kills a lion.)

Maasai don’t grow many crops, and certainly no soybeans. But modernizing the tradition of young morani spearing lion that harass their cattle, it’s now easier to do the job with Carbofuran.

FMC Corporation tried to defend itself unsuccessfully. The ruse was outed. Finally, FMC agreed to buyback all the pesticide from individuals and store shelves in Kenya, while simultaneously exporting more product to neighboring Uganda and Tanzania where environmental authorities are far less aggressive than in Kenya.

Only a few weeks ago Wildlife Direct reported more lion kills in the Mara by Carbofuran and extended its claims to wildlife across the country, including many birds.

And now the tale may be twisting back onto itself.

Americans like to think individual responsibility is all that matters. A video game might instigate a child to become a murderer, but it’s the parents’ responsibilities, not the government, to stop the child from viewing the poison.

But it’s OK to produce the poison in the first place. Just use it responsibly. It’s for aphids.