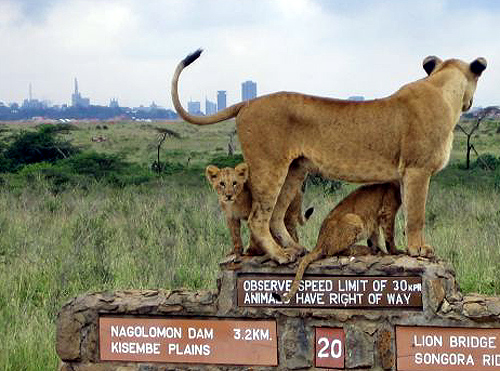 There is no more simple example of the battle between development and wilderness than a highway. Friday the wilderness won in Nairobi.

This because it was almost entirely local. A combined effort from a number of local wildlife organizations and a few prominent conservation crusaders like Dr. Paula Kahumbu successfully battled several Kenyan agencies that had approved the start of the highway.

Nairobi National Park is an incredibly tiny wilderness that borders one of Africa’s largest and most sprawling cities. The battle to save it over the years has been one of those you think of as lost causes.

Birders never deserted the 40-square miles of grasslands bordered by the Athi River but many big animal enthusiasts did, particularly during droughts.

It just seemed ridiculously pointless to try to preserve a wilderness literally bordering a city that was growing so fast you can hardly move inside it, anymore. A few weeks ago I blogged about the lions that were disrupting traffic!

But I guess that should have been our glimpse into how things were going. Lions? At the edge of a city? Blocking traffic?

Before we get too ecstatic and believe that the natural order of things will always prevail, it’s important to note the judges’ decision to void the Kenyan Highway Authorities plan was also heavily based on the fact it appeared the highway was going to built too close to Nairobi’s second airport, Wilson, violating other agency regulations.

Nevertheless, the wording of the judgment and the invitation by the tribunal that the numerous wildlife authorities bringing the complaint can petition for legal cost reimbursement, suggests it might have been stopped even without this infringement on Wilson airport.

Another remarkable facet to this story is that the judge tribunal was not one in the main judicial arena, but from “NET,” the National Environmental Tribunal. Think of this as Kenya’s EPA, but it has wider judicial powers. While its ruling could be appealed to a higher court, it can’t be sued like the EPA can.

The problem is that Nairobi’s become too big. No one dare suggest a population count, despite a recent census, because the seven slums that surround the city (parts of one which actually abut the national park) make such counts so inaccurate. But many city planners are using something around 5 million.

That makes it seem tiny when compared to Shanghai or Mexico City, but given the fact it has doubled its size in less than a decade gives city planners serious concern.

And no more obvious concern than driving to work. Or for that matter, a tourist driving from the airport. Please note: Do Not Arrive Nairobi on a weekday morning, unless you don’t mind a two-hour commute over about eight miles.

One wonders what type of people can tolerate such nerve-wracking oppression? But that’s been the wonder about Africa for centuries. Once slavery. Now traffic congestion.

But above all this tale should remind us that the most powerful advocates for preserving Africa … are Africans.