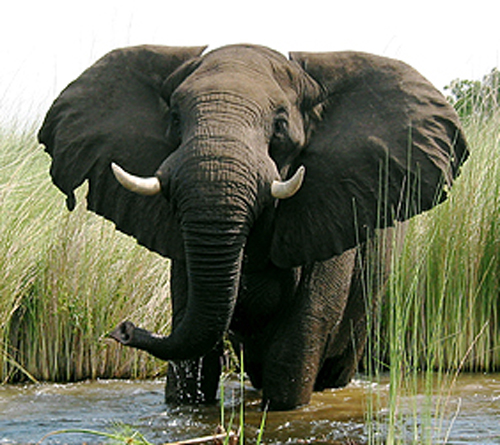 After a relatively long period during which Zimbabwe’s national parks seemed to be recovering in spite of Robert Mugabe, tourists reported gunfire in the country’s main national park this week.

And — unfortunately — it was not the gun fire of a revolution. The shots came from hunting rifles.

Hwange National Park is Zimbabwe’s most precious big game wilderness. Located in the northwest of the country, it was one of Africa’s primary game reserves throughout the last century.

You need to be cautious when researching it, though, as is true of everything today in Zimbabwe. The link above to Wikipedia is quite dated, with Hwange’s biomass considerably smaller than the library reference suggests, and its ecology far more fragile.

“…the number of animals being snared for food by local people living on the boundary of the Park has increased dramatically,” reports one of Hwange’s most dedicated tourism operators. This because of severe food shortages throughout the country.

That’s only one of three major problems facing Hwange, today.

The second serious problem with Hwange is its very design. Wildlife filmmaker, Aaron Gekoski, documented this recently in his March production, “Grey Matters“.

When Hwange was created in 1928 it was understood there was not enough water for a real wildlife park. So the government built boreholes, water wells, throughout the park and has been pumping water for the wildlife ever since.

This isn’t unique. The same is done in Namibia’s main national park, Etosha, and in a variety of national and private reserves throughout southern Africa.

It works if maintained. But the last Zimbabwe resource that the current dictator cares about is its wildlife, and the boreholes have not been maintained. Fewer than half of the original ones are operating, and as a result, the animals are dying.

But Hwange’s greatest problem, reflected this week as tourists trying to find an elephant in Hwange instead heard it being shot, is the wholesale looting of its biomass, and not just by corrupt government officials, but by private hunting companies.

And without any study or regards to biology or ecology, the government of Zimbabwe is trading animals for political favors.

Last year foreign wildlife investigators confirmed that the government of Zimbabwe had exported at least four small elephants to China. The act was little more than stupid cruelty by the seller and receiver. Four young elephant removed from their families have little chance of surviving, anywhere, much less in a Chinese zoo.

There was such worldwide outrage at this act last year, that the global treaty which governs the trade in international species of which China is a signatory, CITES, banned any further such transactions between Zimbabwe and China.

China is legendary at publicly accepting such restrictions while finding ways to work around them, or to simple illegally ignore them in practice. But the attention this focused on Zim’s dwindling elephant population provoked a real local vigilance that seems ready to expose any subsequent violation.

But while internationally Zimbabwe may be restrained, internally it’s gone bonkers.

One of Zimbabwe’s most important wildlife reserves is the Save Conservancy (pronounced Sav-hey), in the far southeast of the country that was once scheduled to become a part of a trans-national wilderness withn Mozambique and South Africa wildernesses.

Land grabbing has grown from sport to routine in Zimbabwe, and Save is being eaten away as the Mugabe regime parcels it out to its cronies.

And add to this devil’s den of looters professional hunting.

In the old, good days, Zimbabwe was a preferred destination of hunters, and its wilderness was one of the best managed in the world, with hunters and non-hunters in grand alliances that did much to preserve Africa’s game.

That’s changed. This week tourists in Hwange reported hearing gunfire, and not the kind which would excite us all that the regime was under assault. These were the shots from hunting rifles.

But the Zimbabwe Conservation Task Force (ZATF), a proactive and somewhat subterranean wildlife NGO, insists that Zimbabwe professional hunters are now regularly harvesting animals technically illegally from national parks and private reserves, with the tacit approval of the Mugabe government:

Arnold Payne, Ken & Tikki Drummond, all of Impala African Safaris, have been named as the principal thieves.

Worse, ZATF says, “It is suspected that some of the hunters … are US citizens.”

The old adage, three strikes and you’re out, is dangerously close to being true in Zimbabwe’s big game wildernesses: subsistence hunting forced by food shortages, an ecological design of national parks that can’t withstand neglect, and now wholesale looting of the biomass.

Hwange and its other sister wildernesses in Zimbabwe which for so many years were the treasures of Africa now teeter on the brink of annihilation.