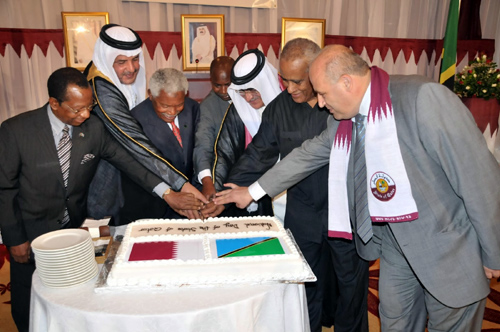 If you’re planning a trip to Africa, you might be surprised to discover the way you’ll get there is not through London or Amsterdam, but Doha.

China and Europe are retreating from a long period of heavy investment in Africa, and it seems that Middle Eastern countries are racing to fill the gap.

The global economic climate does not bode well right now for Africa. Even though America seems to be doing alright, almost every other part of the world is teetering on the brink of another recession.

Europe’s growth is stagnating and a crisis of the sort occurring in the Ukraine could send it further downhill.

China’s economy is slowing Chinese investment is retreating from the African continent.

Since China has been Africa’s principal investor for more than a decade, this means Africa will suffer terribly, especially South Africa. At the same time it means that opportunities in a wide variety of industries become available for new players, and that right now seems to be the oil-rich MidEast countries.

In my own industry the most obvious indication is air travel. Although airlines are thought principally as people movers, much of their revenue comes from cargo. The two are inextricably linked in any good business plan.

Recently, the longest supporter of East Africa transport to Europe, KLM, announced a serious cutback in its service to Kilimanjaro airport in northern Tanzania.

While this may indeed reflect a decline in passenger traffic, it also reflects a decline in the cut flower market in Holland as the KLM jumbos transport enormous amounts of cut flowers to Europe.

Taking up the slack has been Turkish and Qatar Airlines. Both airlines are doing well and expanding rapidly and much of the expansion is into Africa.

With the airline comes business and the MidEast is not suffering a recession. Africa has its whole modern history relied on foreign investment and its cultures have often moved with those who invest most heavily.

Are we poised to see a whole new and large Africa/MidEast alliance?