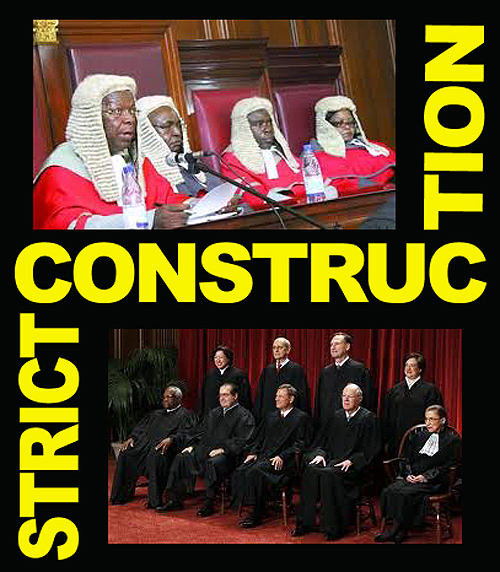 Congratulations, America! You have now joined the exclusive club of despotic African societies!

Yesterday’s Supreme Court decision aligns America with numerous African dictatorships and sequesters us from virtually all the rest of the developed world.

The increasing number of despots and autocratic lawmakers in Africa is directly linked to democracies which “freely and fairly” elect them. “Freely and fairly” is governed by individual African constitutions and laws, as everywhere in the world.

Constitutions and laws in Uganda, Zimbabwe, Cameroon, Angola, Ethiopia – among others – require their leaders and lawmakers to be democratically elected. The most recent atrocity was in Zimbabwe, where even the European Union could not find mistakes in the democratic process which brought the dictator Robert Mugabe to power for his 34th year:

“The EU congratulates the people of Zimbabwe for a peaceful vote and for turning out in high numbers. It welcomes the generally peaceful and orderly manner in which the elections were conducted.”

Zimbabwe’s election was hailed as free and fair by South Africa, that was appointed by several world agencies as the principal moderator, and the African Union.

Here’s the point: Mugabe is horrible for his people and somehow, they are fooled into thinking otherwise.

That’s what money does. That’s what television advertising that tells lies which cannot be challenged in court does. Most people can be convinced by repeated lying.

While I think there are plausible arguments that America does similarly, that’s not the point, either. All the HRW infractions cited are legal in Zimbabwe.

If a so-called “democratic society” allows practices clearly intended to dupe or otherwise undermine the free will of its people, the elections can nonetheless be “free and fair.”

So it’s hard to fault our Supreme Court for the decision. It was a logical one. What is the problem is not the Supreme Court, it’s America’s constitution that the Court is “upholding.”

Money rules. Drill down to all the horrible practices in Zimbabwe or any African country, and you get to “influence” which is “money.”

As soon as a certain oligarchy in any society is able to control a certain large percentage of that society’s wealth, they can sustain themselves “freely and fairly” using democracy.

That’s what yesterday’s Supreme Court decision affirms. The American constitution was created more than 200 years ago to protect independent landowners from British domination: to protect the oligarchy capable of ruling distant America.

Albeit that these great men might have been beneficent, they had no intention of ceding any power whatever to slaves or other minorities, much less women or the poor. They constructed a government to protect themselves as better than their British overlords.

The chances of changing the American constitution right now are less than changing Zimbabwe’s, yet that is exactly what has to happen to remove America from the putrid stagnation of a despotic future.