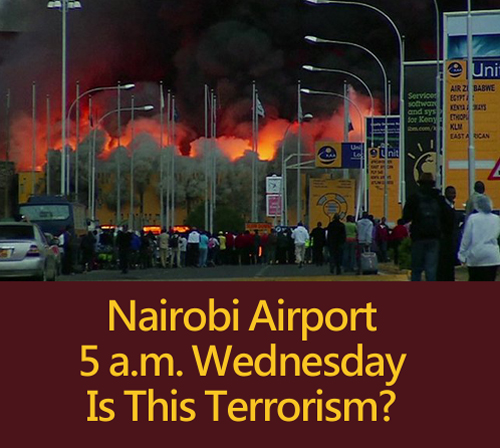 Is this terrorism? What should stranded passengers do?

Stranded passengers should contact their airline; there’s no alternative. If you’re on the ground in East Africa your ground operator will assist you.

Passengers planning to travel soon to East Africa via Nairobi might consider quickly rebooking to another airport. My best guess is that near normal international traffic into Nairobi will begin in about a week.

After 15 days or so, normal traffic will resume, although the airport arrival and departure procedures in Nairobi will likely be delayed. For this reason if you hold a short connecting time connection in Nairobi, consider rebooking now for at least the next several months.

There are frightening signs that this is terrorism. First, today is the 15th anniversary of the Nairobi embassy bombing. Second, had the suddenly erupting fire been 2 hours later, the terminals would have been full of arriving passengers.

Jomo Kenyatta Airport is one of the least secure airports in the world. Passengers often notice multiple secure checks, because the individual airlines don’t trust the government personnel, so they follow the normal airport security with their own.

Monday’s short airport closure, we were told, was because of a sudden loss of jet fuel. That’s incredibly suspicious. Major airports do not run out of gas.

If – and this is a very big IF – this is the reason the western world went into lockdown this last week, then we have another example of botched terrorism. That doesn’t mean it’s not scarey, just that if this is the best they can do, thank goodness.