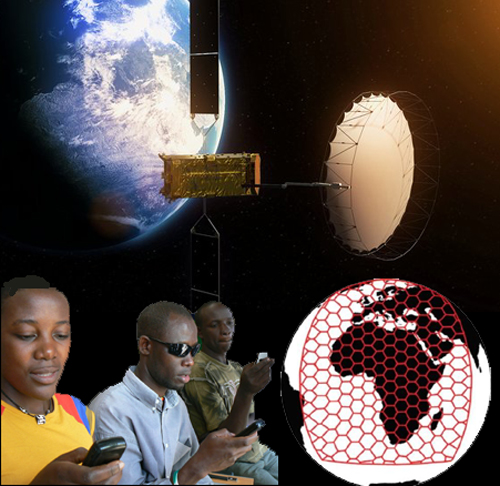 Wifi and cell phone frustration in Africa is set to ease soon when the gigantic, new Alphasat telecommunications satellite comes on line.

The frustration with broadband in Africa is just an accentuation of broadband frustrations worldwide: reliability. And it’s pretty reliable, really, at least by my own experience in sub-Sahara Africa.

There’s hardly a place on safari where I don’t have cell phone reception. The exceptions are large parts of northern Botswana and much of Uganda, but in total I’m amazed at how extensive the coverage is.

And like the millions of users, I become used to it. So when it goes down, which seems like often and likely isn’t, I’m not prepared. Someone’s waiting for an answer. The blog has to publish. Should-haves smother me in guilt, like why didn’t I confirm the charter flight yesterday instead of waiting to the last minute?

Because, obviously, that’s what instant communication allows us to do: wait until the last minute. We simply discount its reliability as something to worry about.

But, in fact, Africa has been at a disadvantage compared to other parts of the world. There are today 23 communication satellites in geosynchronous orbit, which means they are dedicated to principally commercial communications. (The number of military and non-private satellites is probably much greater, and they stealthily move all over the place.)

Of those 23, there is a very small one for Egypt, another small one for Nigeria and a European operated one that covers some of Africa. Not much, and it’s the reason all African telecommunications has been developed so far using underwater cable.

Now, that will change with the deployment of Europe’s largest ever telecommunications satellite that will operate with the world’s fastest and most advanced technologies.

Alphasat was launched last month and opened its wings this week. Everything so far has been flawless, and tests are continuing. Deployment onto the commercial world will likely begin next month.

The satellite will be operated by the British telecommunications company, Inmarsat.

That’s an enormous statement on the economic importance of Africa’s use of the internet and cell phones. Both on a unit basis are trivial in economic terms, and it’s an affirmation that shear quantity of use will produce a viable business.

In fact Alphasat’s technology is among the first that can handle an individual cell’s communication, rather than as massive bundles. This type of capacity requires multiple motherboards, so to speak, each that operate at 22 gigabytes per second. That ought to burn your head.

Like economies in general, a single big communications satellite over Africa, when there are 5 over Israel and 20 over the U.S., doesn’t seem impressive. But for those of us who live in Africa and rely on modern communications, it’s a huge boost.

And it’s kind of nice to note that this grand increase in capacity is for texting irrelevant information about the weather and talking endlessly with your girlfriend, as opposed to aiming a nuclear arsenal at a town in Syria.