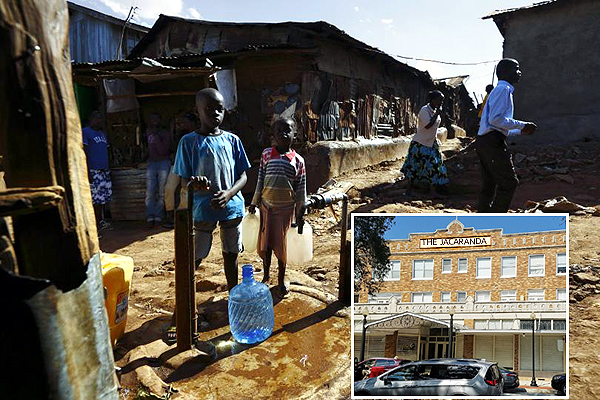 When Kathleen and I first went to Africa in the early 1970s we were warned about mosquito-born diseases like malaria, but there were few other dreaded diseases. AIDS wasn’t yet known. Cholera seemed to be confined to the slums of Asia and South America.

Cholera has broken out in Nairobi. The first 30 or so cases were not found where you would expect to find a hard-to-transmit but deadly disease: in the slums. More than 400 cases have been confirmed and many in two of the most upscale areas of the city, Karen and Westlands. What’s going on?

This morning I spoke with the general manager of one of Nairobi’s most upscale hotels, The Villa Rosa Kempinski, Kees Heuveling. The hotel is about a half mile, seven blocks from the Jacaranda Hotel, which was closed Wednesday by the Kenyan government because its workers tested positive for cholera.

“Our hygiene is always in place,” Heuvelng told me, “and not just during a cholera outbreak.” He then refused to answer any other questions insisting that was “the professional thing to do.”

Of course it’s not the professional thing to do. The professional thing to do is to reassure potential guests of which I’m one. Cholera is a water-born disease, so I asked him to explain his water treatment procedures, but he refused. When I asked him to confirm his location relative to the Jacaranda, he told me to reference Google Maps. I’m due to arrive the Kempinski for a two-night stay on Tuesday.

Reactions of this sort by professionals in Nairobi’s best hotels is cause for concern. Heuveling seemed nervous, anxious to get off the call. It makes one wonder if there are other more pressing things he needs to get to.

What professionals should do is explain that cholera is an easy disease to avoid. It’s definitely water-transmitted, but as our own CDC explains, “The risk for cholera is very low for people visiting areas with epidemic cholera. When simple precautions are observed, contracting the disease is unlikely.”

Using only bottled water and eating only cooked foods secures one’s health. Shower and bath water from hotels – even downmarket ones – is unlikely to be infected, because it isn’t handled by others before exiting the spout. Swimming pools are normally treated with chlorine which kills the bacteria.

As Doctors Without Borders explains, “The infection spreads when someone ingests food or water contaminated with the feces or vomit of someone carrying the disease.”

That seems a rather simple thing to avoid, especially in an upmarket hotel. The Jacaranda Hotel, in addition to the Weston Hotel in Karen where the outbreak first occurred in May, are good but not upmarket properties. Nairobi is in a constant state of water and sewage crises as it tries to keep up with its ever burgeoning population.

Villagers flock to Nairobi for jobs. This grows the horrible slums on the periphery of the city. Villagers with personalities and training who attract the attention of hoteliers may indeed break into the arena of the fortunately employed. But they arrived Nairobi without any social safety net, poor and desperate and lived for a time in the slums.

As they start working, before that first pay check, supervisors may overlook ensuring they are following basic hygiene.

No one can say for sure that this is how the bacteria was brought into the two good Nairobi hotels. It’s not something I should suggest: It’s something that Mr. Heuveling should have.