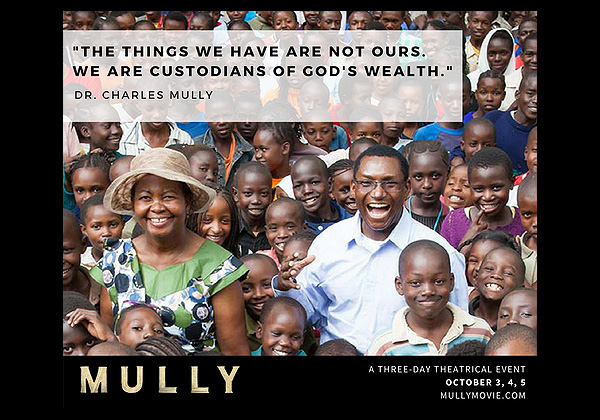 There have been several outstanding Kenyan films which made it to the Oscars. The current Oscar nominee for Best Foreign Film from Kenya is not one of them. Beware.

‘Mully’ is a propaganda film of the Christian Right, and it’s a sudden blemish on the Oscars that Hollywood with all its current soul searching has decided to define its soul by Christian extremists.

The film is a rags-to-riches documentary about a real Kenyan man who magnanimously gave up his wildly successful businesses to fund orphanages and colleges throughout Kenya. Charles Mully seems to be a wonderful and generous person, and the good he’s done for a lot of Kenyan kids is undisputed.

“Mully isn’t much in the way of cinema,” one New York Times movie critic put it succinctly, because … well, it isn’t good cinema. Rather, it is good propaganda for the Christian Right. Mully credits his rise-to-riches as Christian destiny.

Focus on the Family along with a number of other Christian groups funded and promoted the campaign for Kenya to name Mully as its nominee to the Oscars.

The film’s writer and director is Scott Haze who peaked early as an actor in the 2014 film, Child of God. Every person involved in the film from start to finish has deep connections to the Christian Right.

The official American foundation collecting rising donations for Mully’s work in Kenya is listed in Georgia but too small to be rated by major charity watchdogs.

Charley Malmquist is listed as the charity’s marketing director. He has already tempted legal fate by arranging a trip to Kenya led by his wife and himself that he argues from its website is a “donation” that may be listed as a tax deduction… including the game drives, by the way.

Mully’s work for children and his personal story are real, fascinating and inherently good. That doesn’t make Mully’s work a good film, and it shouldn’t justify Mully’s work as a good model for social development.

Therein lies the devil: The film lauds the work that creates the film. It’s a self-serving cycle of affirmation that as it grows excludes criticism.

And there’s a lot to criticize. I won’t edge in on the New York Times’ film critic, but I’ve written so many times before how various charities in Africa are mostly destructive, primarily because they are so self-serving they never grasp the bigger picture.

All the individuals helped by Charles Mully will loudly dispute me. But with time one must ask if all the financial donations and public time and attention given Charles Mully were instead used as the energy and funding for a wider government program, which would do better?

I love asking this question, because the Christian Right blossoms into a giant smile presuming I’ve proved their negative. That’s the immaturity of lacking self-examination: Government programs even in their worst forms throughout my entire life time and work in Africa massively outperformed any parallel charity. You can prove this by the numbers, or by the memoirs, or by the real academic studies. The vast majority of charities waste our potential.

The film’s subtitle is, “Changing the World One Child at a Time.” The world will not change with the change of a single child or 20 children or a thousand children. It will change when CHIP is refunded. Believing and supporting otherwise is simply a feel-good copout.

Charles Mully should be Kenya’s Minister of Social Services, absolutely not an Oscar winner.