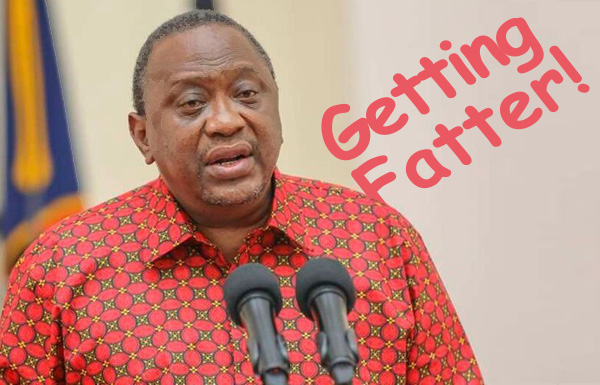 Terrible, scandalous, hypocritical and immoral but never surprising. Africa leaders have feathered their beds ever since colonial masters bribed them into submission, ever since world powers bought their Cold War loyalties, then now when giant corporations and disreputable not-for-profits buy influence. Excruciatingly terrible but what’s new?

I think Kenyans will get angry this time. Until these revelations in the last few days, Kenyatta enjoyed remarkable support, particularly because of his campaign against corruption.

The country’s leading radio station reports that “Kenyan investigative journalist John Allan Namu who is part of the consortium said he sought a comment from President Kenyatta and his family during the investigation but no response was forthcoming.”

Shortly thereafter Kenyatta released a weird statement from the U.S. where he’s currently traveling: He praised the ICIJ for its report, supported accountability of those who were corrupt and then as an aside added he would respond directly to the charges against him later.

Kenyatta is in the “less rich billionaires” category – only about a half billion. Along with other African leaders like Gabon’s Bongo, Congo’s Sassou-Nguesso, Ivory Coast’s Achi, and assorted ambassadors, supreme court justices and so forth, he falls well below Kings from Jordan and western operatives.

“The Kenyatta family has ruled one of Africa’s largest economies for decades,” an ICIJ story specifically about Kenyatta explains. “But to the Swiss advisers who helped him siphon public funds into into secret tax havens, he was simply ‘Client 13173’.”

The ICIJ documents the methodical increase of the Kenyatta family’s wealth from Uhuru’s first year as president of the country in 2013.

Uhuru created or bought seven secret foundations and used a bunch of other money laundering entities that allowed the family to siphon about $30 million directly off public accounts, which over the last near decade increased the final family wealth to an estimated half billion.

The papers are remarkable for their historical integrity. Uhuru was actually the second Kenyatta to be president of the country. His father, Jomo, the “Father of the Country,” was the country’s first president from 1964 to 1978.

That was when the Kenyatta fortune was born, according to the ICIJ. Jomo’s wealth, though, didn’t come from manipulating public funds into secret accounts but through specific land laws that he pushed through Parliament resulting in huge amounts of Kenyan land very cheaply acquired by the Kenyatta family.

But you can’t be a crook sucking dry your country all by yourself. The ICIJ shows in brilliant detail how so many others in Kenya were bought off, defying political divisions:

“Throughout the years of [Jomo’s] administration, both land grabbing and irregular land allocations were perpetrated by and for the benefit of the president himself, members of his immediate family, his relatives and friends,” the report states.”

So that when Jomo was followed by a ruthless dictator of a traditionally warring tribe against the Kenyattas’ Kikuyu, the Kenyatta family was mollified with … cash.

The ruthless dictator, Daniel arap Moi, ruled the country after Jomo with an iron fist from 1979 through 2003. The ICIJ claims that Moi’s current fortunes exceed $2 billion, originally looted from public coffers that Uhuru and other opposition politicians never questioned.

The details supplied by the ICIJ will infuriate any decent Kenyan, and there are plenty of them these days. The country’s anti-corruption campaign underpins any successful political candidacy today, and Uhuru was riding high on it.

It occurs to me he might not want to return home. No real bother. The family owns several ranches in the West and other property throughout the U.S.