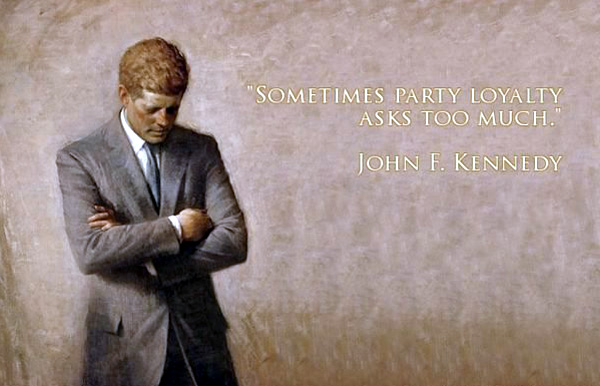 Party power controls democracy. Elections make the final decisions but to get onto the ballot you have to go through the party.

Independents have a slightly greater shot in America where primary elections aren’t closed exclusively to registered party nominees but it’s rare in America that an “independent” who caucuses as a Democrat is challenged by a Democrat in the primary.

Political parties are a post-democratic construct. None of the American framers or French revolutionaries thought democracy needed organized, regulated and registered “parties” to perform.

In fact political parties are actually a non-democratic construct, the way autocratic societies like China are run. So virtually everywhere in the world where a supreme dictator doesn’t exist, it’s the party that matters.

It was the South African party, the ANC, that finally forced out the last South African president, Jacob Zuma, and the Party, the Tories, that forced out British Prime Minister Theresa May. The former like Nixon resigned in light of growing evidence of misconduct and the latter because she defied her Party’s consensus about Brexit.

But in all cases, when the party abandons its leader, the leader falls.

Are we seeing something similar going on in the United States, now?

I wrote a lot about Jacob Zuma’s trials and tribulations throughout the lengthy “State Capture” saga that committed his legacy to disgrace. It was amazing how long his party stood behind him.

For one thing no one in the ANC thought there was an acceptable alternative to Zuma. They had had a series of less than outstanding chief executives and no one dared to challenge Zuma for the very reasons that Zuma was ultimately ousted:

He was so corrupt that he’d make your life miserable if you weren’t loyal. At the very least you’d lose your elected position. Moreover there was a feeling that as standard bearer of the party anything for which he was criticized applied as well to everyone in the party.

Finally there was a feeling in South Africa that the ANC had lost its way. Other parties for years of no consequence were suddenly appearing powerful, and their main opposition, the Democratic Alliance, had won elections in important strongholds previously held by the ANC.

What’s amazing to me is how long these politicians will remain loyal. This is the mafioso credo. Loyalty begets protection while protecting the protector.

But in South Africa finally the threshold of tolerance was breached and the Party caucused and forced Jacob Zuma out, giving him the option of resigning or being defrocked which would hasten his legal prosecution and result in losing all his pensions.

The result was a sudden rebirth of the ANC, which now is more powerful than ever in South Africa.

The last thing I want is for Republicans in America to be reborn, but history can’t be easily mistold.

If American Republicans want to survive they have to excise their leader. Many might argue it’s too late, and perhaps that’s why yesterday the 53 August men and women voted lockstep together throughout the rules debate on Trump’s impeachment.

It’s one for all and all for one, it seems.

But American politics is out of sync. The minority wields the greatest power because it managed to elect the President and hold onto the Senate. The electoral college, Citizens United and an absurd obsession to freedom of speech even when that speech is destructive or hateful have distorted American democracy far beyond one-man, one-vote.

So maybe the ANC is no precedent for American Republicans.

Perhaps South Africa truly is more democratic than the U.S.