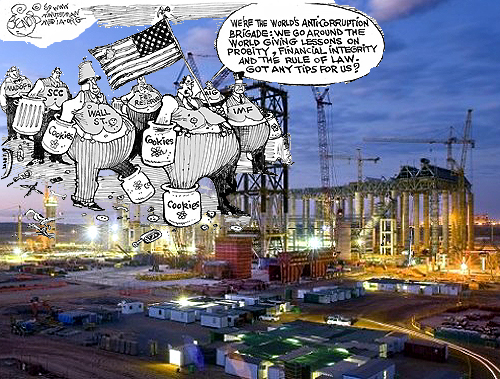 America slaps the wrist of a Japanese company that bribed South African authorities to beat an American competitor. Ouch did that hurt! At all?

It’s now up to a judge in New York to decide if it hurt.

Yesterday, the Obama Administration’s Securities and Exchange Commission (SEC) announced a settlement with Hitachi, a Japanese construction company that was bidding against American companies to build coal-fired power plants in South Africa.

Hitachi agreed to pay SEC $19 million to close all further litigation against them.

SEC charged that Hitachi paid about $13 million in bribes to South African individuals and corporations linked or belonging to the ruling party, the ANC.

When the project is completed Hitachi stands to earn a billion.

So on the one hand, of course, if you’re a capitalist it makes perfect sense to drop a little kick-back of around .13%. In fact, it’s so little that you’re well hedged to pay any SEC fees that might come along.

South Africa’s ANC is embroiled in so many scandals it’s getting boring. This one has been followed closely for nearly a decade.

So in some ways it’s not news. Hitachi is breaking ground soon, it’s paid its naughty fees and the ANC has illegally benefited and likely South Africa won’t get the best deal.

That isn’t to say Hitachi doesn’t build good coal-fired power plants. I have no idea if it does. But this itty bitty reproof SEC has given them for flagrant moral and legal violations means that not only is bribery being institutionalized in South Africa, but at the courtesy of the great country of America.

So give me a break, folks. Anybody talking about how corrupt Africa is better re-read this, first.