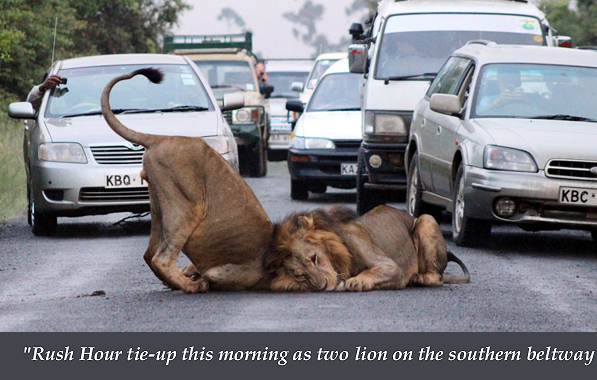 The contentious struggle about what to do about lion has heated up. Two UN agencies, including CITES, are teaming up to categorize lion as endangered as rhino.

That would end most lion hunting as well as pave the way for local governments to seriously criminalize interfering with lion. There is an awful lot to unbundle from this.

CITES is the world treaty that lists endangered species which cannot be commercially traded or moved through international borders. It was created by the U.S. and Kenya in the mid 1980s to save elephant from extinction, which it accomplished in spades.

About 35,000 earth organisms are listed on one of the three CITES appendixes (5800 are animals and the rest plants). The three divisions are not simple tiers of endangerment. Appendix 3 has only a couple hundred species which are listed there not necessarily because CITES scientists or conventioneers have decided they should be, but because their country of origin has decided they should be.

The Bengali Fox is one such animal listed on Appendix 3, because India has protected it. Not enough science has been conducted on the animal for the CITES convention as a whole to yet decide how endangered it is, but it’s listed because any interference with India’s determination is considered wrong.

About a thousand species are listed on Appendix 1 resulting in heavy restrictions and that’s the category many now want the lion to be “lifted” to from its current Appendix 2. Appendix 1 implies imminent extinction. Appendix 2 implies extinction if remedies aren’t quickly applied.

Is imminent extinction of the lion actually true? Keep in mind that this reference is to the wild only. Rhino, for example, do extremely well in captivity. Technically they will never become extinct because there will always be captive breeding facilities to sustain them. In CITES jargon, though, they will become extinct soon, because they won’t be found in the wild.

It’s a distinction with little difference, though. Captive populations are unable to contribute to the health of the wild, which sustain earth’s biodiversity, which is CITES’ mission. The rhino’s behavior in the wild impacts forests and grasslands, which in turn effect water catchments and so on. Captive populations don’t compute.

Lion statistics are truly alarming. Many media reports are correct that there “are more wild rhinos than wild lions.”

The UN study carefully counted the number of African lions at around 22,500. A third of these are in Tanzania. Only five other countries have more than a thousand (Kenya, South Africa, Mozambique, Zambia and Zimbabwe).

This means that nearly half the lion population has been lost in the last twenty years. More alarming, though, is the rate of that decline, which doubles every year.

My own experience guiding in the wild confirms this.

Today there are less than 50 lions in the crater and the marsh pride has been decimated by poisoning.

Those are the most dramatic examples, but anecdotal evidence is clear everywhere I travel in wild sub-Saharan Africa.

The lion is one of the most territorial animals that exists (as are most predators). Fast climate change leads to fast ecological change, and birds and many antelope and to a lesser extent even rhino and elephant are able to react quickly enough to survive longer.

Lion don’t. As the great herds move out of their territory because the grass isn’t growing there, anymore, the lions don’t move with them. They just die.

(Caveat. For many, many years some of us have reported very rare sightings of lion in unusual places that we still believe are nomadic lion. I saw a couple last year following Maasai herders over the Lemuta Plains. Be that as it may, there have never been any real field studies to determine if this is changing behavior or just random situations, and in any case, there are very, very few.)

Lion may be the biggest draw for tourism but they are also the most hated animal by local Africans developing agriculture and other businesses near their wild territories. As with elephant, lion are now a political issue in places like Kenya and Tanzania where the notion of protecting them for rich tourists is drawing increasing local criticism.

So it’s not unexpected that the most vocal opposition to further lion protection comes from Tanzania. That opposition is three-fold: hunting is still a big industry in Tanzania; the country is rapidly developing and there’s a lot of local lion poisoning; and since there are still 8,000 free-ranging lion those in power have decided that’s plenty to still draw tourists.

Like all political decisions in today’s sad world, there’s little long-term interests reacting to any of those situations.

Support for the UN agencies’ position is further eroded by the fact that CITES’ successful saving of elephant from extinction has only brought hardship to most local Africans. See all my many blogs about there are now too many elephant and how much damage they are doing locally.

Lions are headed for extinction, maybe even in my remaining life time. And following the dictates of the CITES convention there is no question they should move up to Appendix 1.

But just like impeachment of Donald Trump could assure his next election and exponentially more damage to the Republic, I also believe moving lion into Appendix 1 could critically injure world support for CITES.

Such equivocations are infuriating. Do you do “what’s right” for the long-term or what results in “the greater good” for near-term so that there is ultimately a long-term?