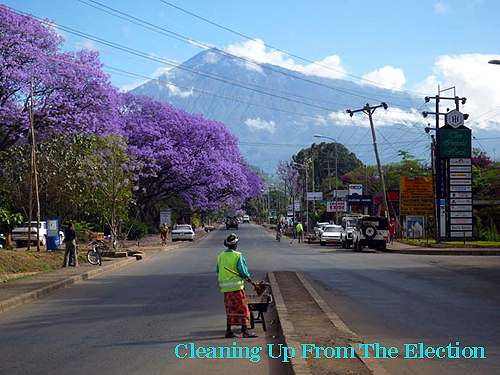 Tanzania’s president-elect John Magufuli is the best outcome from an election that was free-and-fair enough. The disgruntled country seems to agree.

The exception is Zanzibar, where tensions are rising. Travelers should avoid Zanzibar now. The rest of the country went back to work, today. There were few celebrations even in the strongholds of the ruling party. Winners seem to know how seriously disappointed the opposition is.

Losers seem to be accepting the outcome.

Zanzibar is different and always has been. The “marriage” of the independent countries of Zanzibar and Tanganyika in 1964 has never been fully accomplished. The island has a very autonomous government, but in the last several cycles the mainland’s ruling CCM party has held power even there.

This year the island opposition claimed the election count was fraudulent, violence erupted and was quickly contained by what seemed to have been a premeditated arrangement between mainland authorities and those supporting the CCM candidates.

Shortly thereafter the Election Commission annulled the election. Today the island is very tense. Almost exclusively Muslim, Friday is normally a rest day. The island, though, is so heavily invested in tourism a normal Friday would have had far more activity than reported today in Stone Town, the island’s only city.

International observers give the election a passing grade without too much enthusiasm because of the Zanzibar annulment. Foreign observers generally concluded several days ago that that was a mistake.

It was an election of surprising switches and previously unimagined allegiances. Tanzania’s Shakespearean politics twisted onto itself creating a contest between two men who had been close friends and colleagues for years, loyal leaders of the CCM with ideologies and policies that were essentially identical.

Since neither had any substantive difference with the other, both let the electorate fashion their difference: the supporters of each claimed only their standard bearer would reduce the enormous corruption of the country which denies so many millions the basic services they need.

Lowassa comes from the better developed and more rebellious north, so the north was ecstatic when he defected from the ruling party to join Chadema, the main opposition based in the north. Then within days of realigning his allegiances he brought four other opposition parties into a giant opposition to become the first real challenge to CCM’s near 60 years of ruling Tanzania.

Just the simple idea that the ruling party might be undone sent young and educated Tanzanians into the stratospheres of extreme hope. There was no debate over the complicated new constitution, no question about taxes or budget or even schools – which is normally a very important issue, no scrutiny of the fact that Lowassa and Magufuli dropped from the same tree.

No one charged Lowassa with sour grapes for having been dumped by his life-long party. His own scandalous past in that party, his confession to playing a major role in a hundred-million dollar aid scam that resulted in his being fired as prime minister, was hardly mentioned.

Instead, the entire point of the election devolved into nothing more than the possibility that the ruling elite might be defeated, albeit by … one of its own.

Well, it wasn’t. And despite unusually numerous election irregularities, all the outside observers are coming to the conclusion that after serious qualifications to the notion of “free and fair,” the election really does represent the will of the people.

John Magufuli is a good guy. I would have voted for him over Lowassa, simply because to this moment Magufuli remains uncorrupt if complicit with the corruption that suffuses his colleagues. Lowassa is a confessed crook.

Magufuli has worked his way up the ladder of political succession step-by-step over many years. He holds a Ph.D. in chemistry. He’s known for his corruption-busting antics, including hiding in situations to bust unsuspecting corrupt policemen that wander near him unawares.

He comes into office with all the credentials that hopeful Tanzanians actually say they want. But then again so have past presidents like the current one, Jakaya Kikwete. A few years into the role and the glitter is shed, and a poor elected official suddenly has Swiss bank accounts and shares in world hotel chains.

All Tanzania can hope is that this pattern of good guys turning bad might be less easy to do in today’s growing internet world, especially with Tanzania’s youth so currently fired up.

So skeptical but satisfied. Like the country, resigned to what hope remains.