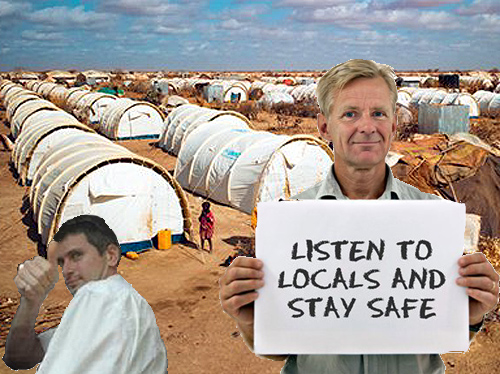 Should a paid aid worker in a dangerous part of the world be able to sue his NGO for not protecting him well enough?

Steve Dennis sued his employer, the Norwegian Refugee Council (NRC), for gross negligence that resulted in his kidnapping in 2012. Dennis refused more than a half million dollars out-of-court settlement, and a Norwegian judge will now soon decide the matter.

Dennis and several others were kidnapped from the Dadaab Refugee Camp on the Kenyan/Somali border by Somali insurgents. They were freed four days later by a commando raid of Kenyan and Somalia government forces.

He contends that his PTSD syndrome and continuing physical ailments that resulted from the kidnapping were all preventable had NRC better security procedures in place.

I think this is nuts.

Everyone – even soldiers and aid workers – should have redress through the courts for being abnormally maligned or mistreated, but Dennis was not.

The NRC is one of the most respected NGOs in Africa. The 100+ recommendations the NRC generated from its own internal investigation into Dennis’ kidnapping have all been implemented and are being widely considered by all NGOs in the Dadaab area.

I suspect there is much more to the story than has reached the media.

Just after the actual incident, the then 37-year old Dennis told his home-town Toronto Globe and Mail:

‘[that] he remains committed to aid work despite having just gone through “a very bad long weekend. I’m still going to be engaged somehow. How, I don’t know. For now I think my job is to take a couple months off and then, if I feel good, take a couple more maybe,” he said with a laugh.’

Dadaab is one of the most dangerous refugee camps in the world, and if I know this I imagine that aid workers do, too.

There are about 22 million refugees living in camps around the world, the majority in United Nations’ organized mini-cities. There are nearly a million in Dadaab alone.

The 10,000 UNHCR employees overseeing these facilities are assisted by an estimated 50,000 other aid workers of the sort Steve Dennis was, persons who are actually working in refugee camps. (Altogether there are around a quarter million humanitarian aid workers worldwide.)

Aid workers are characteristically the most dedicated, moral and upstanding individuals you can imagine. I’ve often pondered why these incredibly intelligent and motivated individuals give up traditional lives with usually greater compensation for such hazardous work.

About a year after the July, 2012, incident Dennis began issuing more and more serious allegations and complaints: his mood had obviously changed. In court documents he chalks this up to his PSTD.

Also about a year after the incident, NRC changed CEOs. In a letter introducing himself, Jan Egeland concluded, “And finally. Be careful, take the necessary precautions and wear a seatbelt. We cannot afford to lose any of you.”

The NRC media arm that issued the letter featured a picture of a smiling, handsome and weathered Egeland holding a large hand-written sign that read, “Listen to Locals And Stay Safe.”

As Dennis’ legal wrangle starting taking shape, he asked the public for $50,000 through FundRazr. The $20,000 that the Guardian newspaper reported he finally raised was apparently sufficient enough to attract ambulance chasers now working on speculation.

I don’t doubt that Dennis suffers from PTSD or that he has other lasting infirmities from his kidnapping. I’m not even sure I approve of the half million dollar settlement NRG offered Dennis, but at the very least it strikes me as incredibly generous.

But if aid organizations are now sued by employees who work in the most dangerous conditions in the world, it would be like soldiers suing the Army for sending them into war!

Norwegians are among the most dedicated aid workers in the world, and Norway among the most committed countries on our planet to making the whole wide world better. So it’s not surprising that they will find fault with themselves.

But I hope the judge notes that Dennis used crowdfunding to attract ambulance chasers. This is not how to save the world.