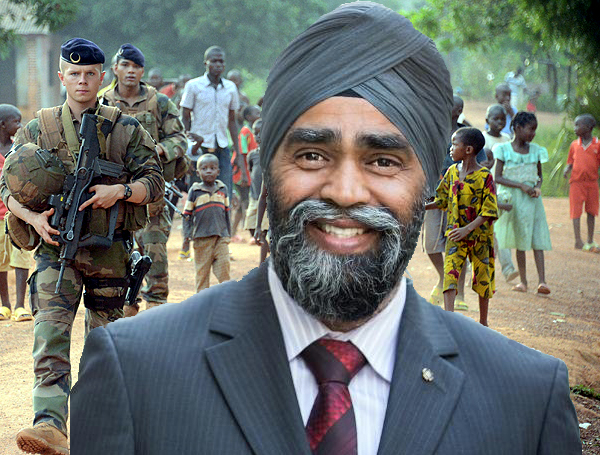 Canada’s defense minister says that the country will use “lethal force” to protect civilians when it sends 600 soldiers into Africa’s troubled regions shortly.

It will be Canada’s first serious involvement in UN peacekeeping in Africa since its famous general, Romeo Dallaire, was thwarted from preventing the Rwandan genocide more than 20 years ago. Then President Bill Clinton used America’s UN veto in the Security Council to prevent Dallaire from using “lethal force.” You know what happened next…

We landed in Halifax late last night, then drove several hours in Canadian darkness on mostly deserted highways. It’s still early here in Lunenburg. I have nothing to report yet about Canada, but my own experiences in Rwanda decades ago make me shiver horribly as I read today’s Canadian headlines.

There are big differences between Canada and the United States, and none better demonstrated than what happened in April, 1994. Hutus were stockpiling weapons for the avowed reason of wiping out Tutsis. We knew this because the country’s radio DJ’s said so, and because Dallaire himself watched planes being unloaded in Kigali with weaponry for Hutus.

It was all public, all reported and angrily debated at the UN. The UN had made Dallaire commander of 500 peacekeeping forces. It was hardly enough, but when Dallaire requested more and the use of “lethal force” to prevent genocide …

Why? Because of American politics. The grave responsibilities that western nations had assumed in implementing the “Arusha Accords” to prevent genocide, the thousands of hours of international debate at the UN, the establishment of a peacekeeping force and Canada’s heroic offer to lead it … all succumbed to American politics.

In 1992 Clinton swept into office with Democratic majorities in both chambers. Then, less than a year into his Presidency he bungled American UN Peacekeeping in Somalia, resulting in 18 marines being killed, more than 50 injured and one captured. This was “Blackhawk down.”

He was afraid that Canada would bungle Rwanda as he had Mogadishu and tick another blemish into his already horrible record in foreign affairs. But his mistake, supported by France, was catastrophic.

The genocide occurred creating as big a scandal for him as Blackhawk Down. He lost Congress in November with an unheard of 54-seat swing. Not too much went well for him over the next several years.

Oh, and by the way, about a million people were slaughtered in Rwanda. Shall we refer to them as fodder for American politics?

The Canadian Minister of Defense will not subject his country to such humiliation, again.

The South Sudan is setting itself up in ways analogous to Rwanda in 1993/94. Canada has been asked to lead a UN Peacekeeping force there, and it would be the first time in 20 years:

“When Canada goes in, we will be fulfilling that mandate of protection of civilians and proactively acting in that manner. And we expect other nations to do the same thing,” Canadian Defence Minister Harjit Sajjanhe said yesterday.

We arrived Canada in the dark, as are millions of Americans all their lives. Africa, Canada, forgotten foreign wars … they’re all a mixed muddle to most Americans. It shouldn’t have taken actually being here in Canada to discover this story, yet it did.

Canada is trying to do something right. Let’s just hope America doesn’t block it, again.