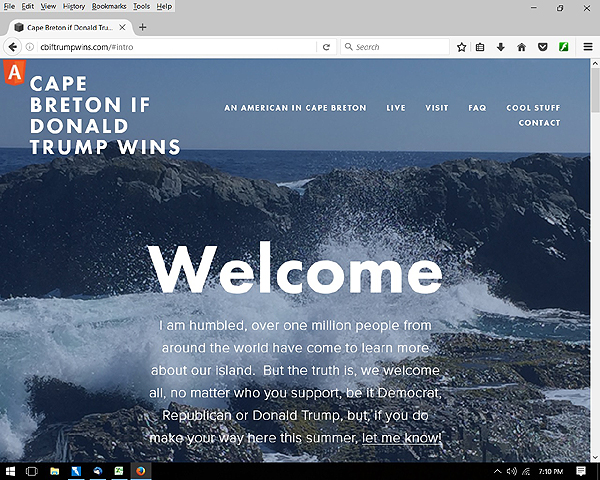 “Why are you doing this?” the question on the website asks rhetorically then answers quickly, “Our population is shrinking. A slow economy… has us on an unsustainable path… We have a beautiful island, a friendly people, a rich culture and a bright future. Join us here on Cape Breton Island!”

The website is “cbiftrumpwins.com.” K & I are in Nova Scotia this week. We’ll be in Cape Breton this weekend. Don’t jump to too many conclusions. We’re visiting relatives, looking at a vacant family house on the southwest shore and have been planning this for some time. But the truth is we’d do almost anything to get away from this mad election. We’ll get home the day before the vote. (We’ve already voted.)

But it is interesting, isn’t it?

The website and staff backup for answering questions was launched early this year when it became increasingly likely that Donald Trump would become the Republican candidate. Much of the marketing is actually directed towards Republicans, not Democrats.

“Residents can enjoy scenic drives, Celtic music festivals, and a diversity of languages.” according to the promotion.”

Also: “women can get abortions, Muslim people can roam freely, and the only ‘walls’ are holding up the roofs of our extremely affordable houses. A team of volunteers is standing by to field questions about moving.”

Nova Scotia lies about 45 air miles due southeast of the tip of Maine, or about an hour-and-a-half flight from Boston. Cape Breton is the northeast tip, known for its spectacular scenery, and while it is the most northerly part of Nova Scotia it’s still lies south of North Dakota. The main city of Halifax is at the same longitude as Minneapolis and Portland, Oregon.

One Brooklyn blogger wrote extensively about her trip of immigration discovery. She found the Canadians too polite, unquestionably welcoming and like everyone was attracted by home costs roughly half that of the American norm and an eighth of those in Brooklyn.

But as the summer wound down, so did Trump’s fortunes and Americans’ interest in immigrating. The CBC reported that actual immigration requests for Canada declined almost to normal after reaching a fever pitch in June.

But there’s been a new twist. The election may be pretty well determined, but virtually everyone in America realizes there will be no real relief come November 9: A split Congress, a very divided if violently divided country and with little prospect for a progressive future…

Inquiries in Nova Scotia are up, again. A realtor I spoke with in the Annapolis Valley, the northwest shore of the island, told me he was booked solid for the next three weeks.

We’re driving all over the island in the next week. Stay tuned!