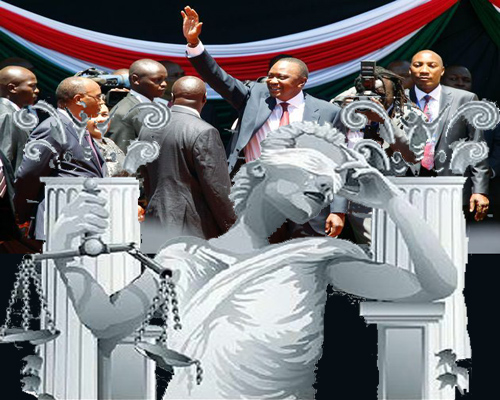 Today’s final detailed explanation by Kenya’s Supreme Court of its decision to affirm the March presidential election makes me doubly angry with Bush vs. Gore.

The clear consensus by much more scholarly analysts who have rushed out their initial impressions is pretty negative, that the detailed decision is “disappointing.”

But quite to the contrary, it helps me understand how insidiously deceptive a political system is where the final say presumably rests with a collection of appointed sage elders with so little obligation to anyone or anything that they can neutrally discern the facts and subsequently convey justice.

Or in other words: Finalismo.

By the way, there was nothing very revealing in the 113 pages, and a little bit for everyone including the critics of democratic methodology and the critics of corruption. I’m no legal scholar, but let me paraphrase the decision this way: don’t rock the boat.

The “rule of law” sounds good, but over America’s much longer history than Kenya we can often find definitive failed justice from the top. And that’s not wholly unexpected since it’s usually the most contentious and/or complicated issues that rise to the top, and it’s just statistically unlikely that the right decision will always be made.

And an incorrect Dred Scott decision foments war. The incorrect decision of our own Supreme Court in Bush vs. Gore arguably paved the way for two prolonged, unbelievably expensive and totally unjust wars.

America has a long enough history that it just seems statistically inevitable that some pretty horrible top court decisions would be made. But this, in effect, was Kenya’s first major decision.

And like America in Bush vs. Gore, the justices’ action put the man who likely lost the election in the winner’s seat: In Kenya by not altering the decision by the election authority (despite massive illegalities) and in America by stopping a recount of votes.

In Kenya it was passive justice; in America it was active justice; but in both it put the wrong man in power, invalidating democracy.

As in Bush vs. Gore, there were plenty of tidbits the justices couldn’t ignore: like the wanton corruption acquiring voting technology and the inability of the corroborating registration system to affirm exactly who had voted.

They even encouraged the Kenyan prosecutors to indict the “tender team” that designed and acquired the voting technologies that massively failed.

Just as the justices in Bush vs. Gore acknowledge that hanging chads if reconciled could alter the outcome.

So I don’t think we can rack this one up to the “statistical” likelihood that all profound decisions will not always be correct. There’s more to it.

In Kenya it means one of two things:

1. The justices were biased towards the flawed outcome, however wrong it was; or

2. The justices felt their meaning for existence was not sufficient enough to alter the status quo.

In America it was clearly Number 1, because they did alter the status quo by stopping the recount. In Kenya it’s hard to say.

And don’t be fooled by rationalists who argue that green is black, that intonation is meaning, that interpretation rather than implementation governed the situations. Legal opinions coming out of the whazoo drown in semantics. Get yourself into that clear air of what’s right and what’s wrong.

I believe that the “rule of law” achieves justice.

There was not “rule of law” in either Kenya or America. In both cases the justice system failed. And not just “statistically” so; intentionally so. Something else prevailed over justice. It’s called…

Power. And unlike the very essence of justice, it has no limits.