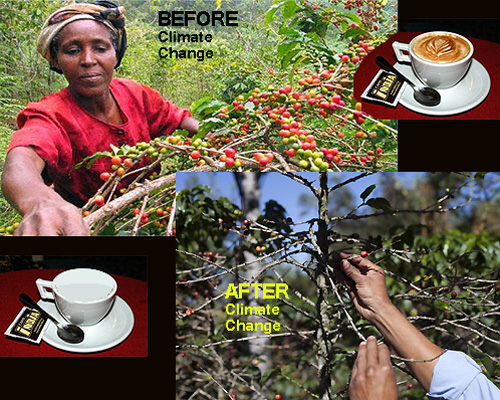 Perhaps this will help Senator Inhofe wake up: coffee.

Coffee prices are escalating in part because coffee production worldwide is taking a nose dive.

Some of the finest coffee in the world comes from the Kilimanjaro highlands. Or did. According to Reuters, “hundreds of farmers in the region are abandoning … coffee and cotton.”

The Reuters report is less provocative as to why than the Union of Concerned Scientists: “Climate change is threatening coffee crops in virtually every major coffee producing region of the world.”

UCS explains that coffee in particular is very sensitive to a slight increase in temperatures. Coffee also requires more stable climates with regular amounts of precipitation.

All that’s changing, and particularly in the Kilimanjaro highlands. The Tanzanian government announced a 29% decline this year in coffee production.

Farmers didn’t need the study released recently by a prestigious university in South Africa correlating the decline in coffee production to an increase in the highlands’ night time temperatures.

“Coffee beans are no longer profitable as my harvests keep on falling,” a villager in the Kilimanjaro highlands told Reuters: “I need fast-growing crops I can sell for a quick income.”

Coffee is a long-term agricultural investment. It takes at least three years, and usually five, for a new coffee tree to produce beans. After that it can continue producing for up to 50 years, but the orchard requires lots of water and constant tending.

The South African study documented an increase of a little more than 2 degrees F over a decade, enough to reduce the harvest by a third.

Large numbers of farmers throughout the East African highlands are therefore abandoning coffee for quick growing and quick selling vegetables … and flowers. The “cut flower” industry is growing in leaps and bounds in East Africa as the demand for them grows in Europe. Major European airlines now make their scheduling decisions more on the cargo of cut flowers than on passengers.

Many other farmers are turning to crops like sunflowers and casava which are less sensitive to climate change.

For the time being the crop changes will not likely effect the Tanzanian economy. The cut flower market like coffee requires high initial investment but pays off much more quickly.

Demand for food throughout Africa grows by the minute, and Tanzania remains a net exporter. The agricultural sector of its economy is growing the fastest.

So perhaps the major effect of this current news will be on Senator Inhofe, reported to love his coffee … even during droughts and floods and tornadoes.