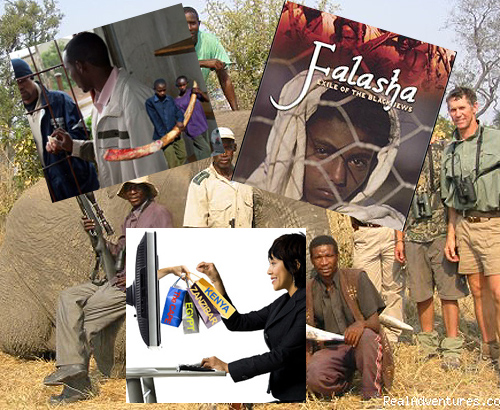 Misreported elephant poaching, a changed attitude against big game hunting, enduring corruption, a radical change in how safaris are bought and sold, and the end of the “Black Jews” in Ethiopia are my last big stories for 2013.

#6 is the most welcome growing opposition to big game hunting.

It’s hard to tell which came first, public attitudes or government action, but the turning point was earlier this year when first Botswana, then Zambia, began to ban big game hunting.

Botswana banned all hunting in December, 2012, and a month later Zambia announced a ban on cats with an indication they would be going further. Until now big game hunting revenues in Zambia were almost as much as tourism’s photography safari revenues, that’s how important these two countries are to hunting. (Kenya banned all hunting in the 1980s.)

The decision to ban a traditional industry is major. While some animal populations are down (lions and elephants) many like the buffalo are thriving, so this is not wholly an ecological decision. Rather, I think, people’s attitudes are changing.

Then in October a movement began to “list lion” on CITES endangered species list, which would effectively ban hunting of lion even in countries that still allow it. There was little opposition in the media to this, except surprisingly by NatGeo which once again proved my point the organization is in terrible decline.

The fact is that public sentiment for big game hunting is shifting, and from my point of view, very nicely so.

#7 is the Exaggerate story of elephant poaching. I write this way intentionally, to buff the hysteria in the media which began in January with a breaking story in Newsweek and the Daily Beast.

Poaching of all animals is showing troubling increases, and elephants are at the top of that list. But in typical American news style that it has to “bleed to read” the story has been Exaggerate to the point that good news like China’s turnaround is ignored and that the necessary remedies will be missed.

Poaching today also carries an onerous new component that has nothing to do with elephants. It’s become a revenue stream for terrorists, and the hysteria to contribute to your local NGO to save elephants completely masks this probably more urgent situation.

And so important and completely missed in the headlining is that there are too many elephants. Don’t mistake me! I don’t mean we should kill them off. But in the huge difference in the size of African people populations in the 1970s and those of today, the stress of too many elephants can lead to easy local poaching, and that’s what’s happening.

#8 is a tectonic change in the way safaris are being bought and sold.

The middle man, the multiple layers of agents inserted between the safari and its consumer have been eroding for decades. But in one fell swoop this year, a major South African hotel chain sold itself to Marriott, leapfrogging at least the decade behind that Africans were in selling their wares.

Most African tourism products are not bought by Americans, and so how safaris were are has mostly been governed by buying habits in such places as Europe. America is far ahead of the rest of the world in direct tour product buying, and the sale of Protea Hotels to Marriott signals to all of Africa that the American way is the world trend.

#9 is a depressing tale. After a number of years where Africa’s overall corruption seemed to be declining, last year it took a nosedive.

Many of us jumped on this as a further indication of Africa’s improving transparency, but in fact, it was just the reverse and Hollande beat us to the punch. In November the European union gave Tanzania a spanking for being so egregiously corrupt.

And then Transparency International’s annual rankings came out. It’s so terribly disappointing and I’d like to think it all has to do with declining economies, but closer looks at places like Zimbabwe and South Africa suggest otherwise. I’m afraid the “public will” has just been sapped, and bad guys have taken advantage … again.

#10 is intriguing and since my own brush with “Operation Moses” in the 1980s, I’ve never stopped thinking about it. The last of Africa’s “Black Jews” were “brought home
” to Israel October 31.

A tribe in Ethiopia referred to as the “Falashas” has an oral history there that goes back to the 3rd century. Israel has always contended they were migrants from the land of the Jews, possibly the lost Tribe of Dan. Systematically, through an extreme range of politics that included the emperor Selassie, to the Tyrant Mengistu to today’s slightly more democratic Ethiopia, Israel has aided Ethiopia.

For only reason. To get the Black Jews back home. And whether they all are or not, Israel formally announced that they were on October 31.