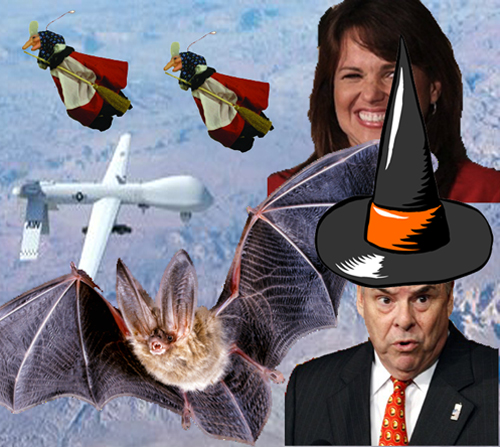 Few commented on Swaziland’s serious law banning flying witches in May, but this week a Zimbabwean newspaper took up the issue as an editorial.

Swazis believe in witches, and the misaligned hill of a country, surrounded by South Africa and still ruled by a monarch, has been neglected by the world and this is the result. Zimbabwe, on the other hand, has had almost as much global attention as climate change, so what’s going on?

With the collapse of apartheid in the mid 1990s together with many of its morally constrictive laws, Swazi’s popularity descended rapidly. One could argue it started to reverse itself altogether and revert to the precolonial period.

Recently, South Africa bailed out Swaziland the same way the U.S. bailed out Chase. The country is riddled with scandal and corruption and ruled by a highfalutin king who may, in fact, never be on earth any more than the witches that apparently beset his sovereign land.

The May law goes much further than just banning witches from flying higher than 150 meters above the ground. It also bans toy helicopters and kites. This because a wicked activist protesting the king’s behavior, Hunter Shongwe, was caught with a toy helicopter that had a video camera on it. Drone.

Zimbabwe, on the other hand, has so many awful problems of its own, why would it descend into the unprovable abstract? Exactly. An “editorial” in Zimbabwe is capable of getting its writer hanged or tortured, and there’s just so many things you can say pleasantly about one of Africa’s most ruthless dictators of all time.

So Zimbabwe Standard editorial writer, Leo Igwe, produced this earth shattering opinion that “we should disabuse ourselves of belief in flying witches” and castigated neighbor Swaziland for ”embarrassing” itself.

“Embracing superstitions should call into question a people’s mental state and cause others to question their claim to rationality. Making superstitious claims should reinforce the idea that some human beings are backward, trapped in the pre-modern age and still down the ladder of human civilization, in an unenlightened state.”

Talk about the pot calling the kettle black.

Forgive me, but this got me thinking. You can’t prove there aren’t witches. Well, actually, you sort of can. By aeons of no proof of a flying witch, it’s reasonable to deduce that there aren’t any.

Similarly, by repeated attempts from the American Right to suggest the economy grows by trickle-down economics and then it doesn’t, you can also surmise it won’t work if tried, again.

But Swazis clinging to their superstitions because they haven’t been definitively disproved, and Republicans believing they will create jobs by strangling the government, are ideas grasped by poorly educated folks with an imagination as big as a pea.

And yet it continues. So much so that the Zimbabwes in the world, like the Peter Kings in the Republican Party, decry such foolery to deflect attention from their own short comings.