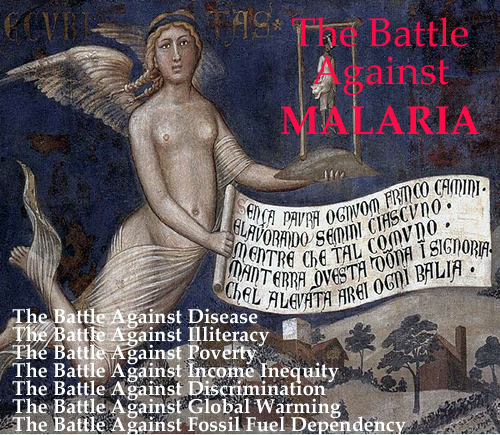 We’re getting oh so close to both a vaccine and simple cure for malaria! And both the journey and the ultimate victory will confirm that only governments, not charity or private enterprise, are capable of attaining such success.

Last week the National Institutes of Health (NIH) announced that it had successfully completed preliminary trials of PfSPZ, what it still calls an “investigational” malaria vaccine that was found to be “safe, generate an immune system response, and to offer protection against malaria infection in healthy adults.”

The discovery was published in the August 8 journal, Science.

This isn’t quite New York Times front page material just yet, because the study group of 57 adults between 18 and 45 years old was very small and localized, and the vaccine success depends upon large intravenous injections. But the result was 100% protection, which is unheard of in such early trials.

This comes on the heels of the discovery of another drug a few months ago that is a simple preventative and cure, which I wrote about in an earlier blog.

AND that was announced just before Africa’s first-ever drug was discovered to cure malaria by an institute associated with the University of Cape Town: “MMV390048″ is awaiting a common name but is a completely innovative malaria drug attacking the parasite at the blood stage.

The key ingredient in these three major break-through discoveries is … government funding. The latter two breakthroughs had private help (the Switzerland-based Medicines for Malaria, and the Gates Foundation.) But in both cases it’s likely they would have been developed without this private help.

But the most important discovery, the vaccine, is strictly a collaboration of three U.S. government institutions: the National Institute of Allergy and Infectious Diseases (NIAID), the Walter Reed Army Institute of Research, Silver Spring, Md., and the Naval Medical Research Center, Bethesda, Md.

I have grown increasingly skeptical over the years of private charity in Africa, and more widely, in general. There is no question that the battle to defeat malaria has benefited enormously from private charity, and specifically from the Gates Foundation.

Just as there’s been a lot of very good charity in all avenues of life throughout Africa with many successes.

But when push comes to shove not even Bill Gates’ billions is enough. Precisely because billions is not always the answer, but rather as shown by PfSPZ, years and years of expertise and experience from a variety of large government research institutions that work together.

Actually, that’s the key to the key: working together. Well meaning charity groups tend to be provincial and often secretive of their research, and I know this is particularly true of wildlife and conservation groups within Africa.

And it’s intrinsically true of private enterprise: Glaxo Smith Kline is probably the pharmaceutical that has spent the most money on malaria research. In 2009 they announced their best success yet, a vaccine that has proved about 30% effective in babies aged five to 17 months.

That’s nothing compared to the above three break-throughs.

At this point in the malaria battle it’s almost impossible to claim that any one group, including the government, has any total monopoly on research and development:

The battle against malaria has been energetically pursued by private enterprise and charity for my entire life in Africa, and before that and since the earliest development in colonial Africa, by government agencies.

So the body of research and experience regarding malaria is huge and very intermingled. Still, as demonstrated this week by the U.S. government health institutes, ultimately it is only massive and massively interconnected government agencies which can achieve the ultimate breakthrough.

And this is no less true of the battle against malaria than the battle against poverty or illiteracy or any social problem. And what’s more, when private success is achieved, it’s often only after much earlier public involvement.

Breakthrough drugs in general is the perfect example. Most drugs’ history begins in government funded public institutions, like university labs.

The irony, of course, is that Glaxo Smith Kline will likely be the principal commercial benefactor of the U.S. discovered malaria cure, as our archaic system won’t allow the U.S. government to manufacture and distribute the drug (except to our troops and civil servants).

Which, of course, is wrong. The drug would then be cheaper, and any profits could be plowed into something else … like say education or housing, instead of acid reflux disorder.

What we are learning in this fascinating journey towards eradicating malaria isn’t that there might not be a place for personal initiative or enterprise, but that the world is too large, complicated and interconnected today to achieve real social success except when governments work well.

And true, many, many don’t. But when on balance they do, like our own United States of America’s institutes of health, then yes, Virginia, happiness can be achieved.