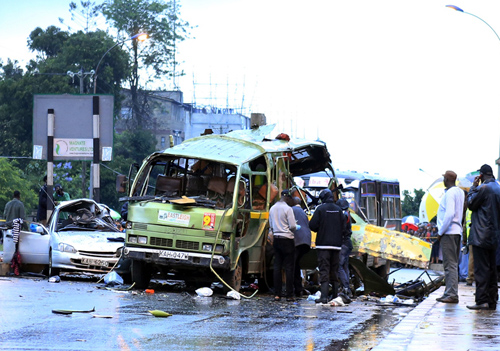 The attack was in the Pangani neighborhood of Eastleigh, Nairobi, an area with many Somali immigrants.

The day before on Friday twin explosions in the northeastern town of Wajir killed another person. Thirteen people have been killed this week alone. Panagani was the 4th attack on the 50th anniversary week of Kenya’s independence.

And among the most striking facts about these attacks is that they were hardly headline news. In most of Nairobi’s newspapers, they received scant attention compared to how they were reported in Europe.

Officers from the NYPD were in Nairobi before the Westgate Mall incident was over, ostensibly to learn from it how to protect New York. Their report confirmed what had been suspected for a long time: the four principal attackers were nearly amateurs by war standards, could have caused enormously more damage if they had better weapons, and apparently all escaped.

One of the chilling aspects to the NYPD report as analyzed in the Daily Beast is how similar the attackers appear in many regards to America’s child terrorists responsible for our growing number of school shootings:

There is only cursory planning. The weapons used are all deadly powerful but often poorly designed for the kind of attack planned, and often, don’t work. Entry and exit for the attackers is easy. And perhaps most chilling of all, worldwide terrorists like those at Westgate are increasingly individualized rather than ideological.

This “terrorist war” whatever it has become is usually instigated by individuals who are mentally ill, or who are not ideological but simply angry, often vengeful.

They are not soldiers under some mission command, and they often have no demands. They just want to … kill.

The Westgate Mall attack and the attack this past weekend in Nairobi — as with almost all the attacks these days in Kenya — is basically Somali against Somali. Just as a school shooter is a student against a student.

The Somali terrorists in Kenya claim to be protesting the Kenyan invasion of Somalia initiated in October, 2011. Kenyan troops continue to occupy Somalia.

Kenyan Somalis on the whole very much supported the Kenyan invasion and now the current mission, which as I’ve often pointed out, is really a proxy war for America and France. Kenya would not have been capable of succeeding in that invasion without hardware, training and logistics from America.

And so the targeted terror is at those Kenyan Somali communities. At the same time the police see these communities as harboring the terrorists, which of course they do.

Money, materials for bomb making and suicide mission recruitment is all done within the Eastleigh community of Nairobi. It is often, brother against brother.

So the comparison with Afghanistan ends quickly, as there are far fewer supporters of Kenyan terrorism in Eastleigh than of the Taliban in Kabul.

But like America, which is losing tourism revenue from school shootings and if it continues will likely loose foreign investment, Kenyans are already suffering both.

The promise of the country prior to the Somali invasion of October, 2011, was exceptional. But last year’s election of an indicted war criminal as president, and the growing tribalism that dominates the Kenyan government now threatens Kenya’s growth.

Conceding the country could be a financial and services powerhouse for the region, the report concluded the country is “a safe house in a bad neighbourhood.”

So the comparison with America is also flawed. Compared to America’s challenge of just getting guns out of kids’ hands, Kenya’s is far more daunting.

It’s no child’s play in Kenya.