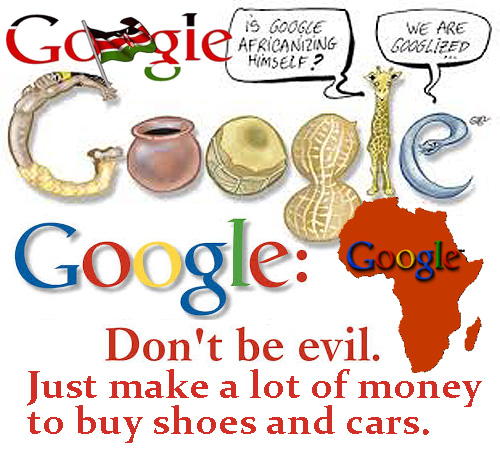 A recent interview with the head of Google Kenya highlights Africans’ growing concern about the giant.

Google rules Africa … at least according to a number of studies in South Africa. 94% of South African searches are on Google, and likely more in other countries like Kenya.

In fact, when studies were published several months ago in Kenya that 90% of all Kenyan internet searches were from mobile devices like phones, Google immediately announced it would alter its search algorithms to prioritize websites that were mobile friendly.

Yes, and no sarcasm intended. Google is responding in Africa with the quickness of the times and the speed of its heart and soul, its search.

But the domination of a couple internet companies in the world, like Google and Facebook, begs the “too big to” whatever mantra.

More and more Africans are growing weary not of post-colonial or geopolitical policies that seem to fence them in, but of world giants like Google that dominate their economies, or at least “rule” them.

I’m not talking of the specious criticism and endless suits against Google for being the vehicle of bad information, although in both Europe and Kenya those suits are gaining some traction.

Nor am I talking about the equally endless internecine suits between the world’s internet giants.

Nor even of the fact that Europe now charges Google with being illegally too big!

“Not knowing something is fine, but thinking that you do know when you don’t is foolish,” writes Morten Jerven in African Arguments. Jorten is Associate Professor at the Simon Fraser University.

Jerven argues in a more polite way than I’m now going to summarize, that newly intellectualized African societies are taking Google searches too much for granted. The nuances that blossom real truth are being completely ignored.

Google seems to know this, but its intention is to capitalize on it, not moderate it.

“Life is 80 per cent luck and 20 per cent you taking advantage of this,” the head of Google Kenya told its main newspaper, today.

Thirty-eight year-old Charles Murito took over the reigns of Google Kenya from a predecessor who was fired for “scraping” data from a competing (and client) internet company, that was then allegedly driven into bankruptcy by Google’s actions. No legal determination was ever made.

Murito epitomizes Google’s supremacy, and its unabashed mission that “everything you do is a business. You have to think about it in dollars and cents.”

He’s proud that “I have more pairs [of shoes] than my wife. My shoes, mostly sneakers, always have to match the colour of the T-shirt I am wearing.”

When pressed for his choice of a car, which in Kenya today defines the top businessmen from the strugglers, he replied, “No. I don’t want to talk about material possessions. But I do love cars.”

Google is all business, and it’s a good one.