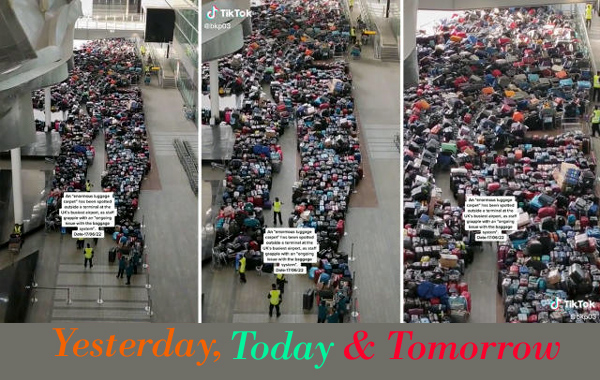 If you’re planning to take an airplane sometime in the next month or two… well, consider driving… or swimming … or just using your xBox. I didn’t mention trains, because in London anyway, they’re on strike.

I’m not talking about traveling to safaris, either – that’s another story. Safaris are not rebounding as expected. The turmoil in air travel is all in the U.S. and Europe.

The stats are stark and depressing. Demand for air travel in the U.S. and Europe wants to achieve pre-Covid levels, but there just isn’t enough staff to handle them.

You might have a confirmed ticket. You might even have a confirmed seat on a specific aircraft, but last weekend’s UK government decision to cut more than 11% of all incoming traffic means your chance of doing what you thought you were going to do is only 9 in 10.

Or putting it in the worse way, your chance of going nowhere with all your confirmed documents is 1 in 10.

And it isn’t just in the UK. It’s just that the UK is being hard-nosed if reactionary while the rest of Europe is just pouting in the corner of the room as chaos prevails. So if you play the odd and your flight and aircraft isn’t canceled, then you’ve got another horrible problem.

Check-in times this week at Heathrow averaged six hours; Schiphol, four and Frankfurt, three. It’s a convenient way for the airlines to cancel your travel without taking responsibility: claiming that you arrived at the airport too late to get onto the plane.

All of this is happening because there aren’t enough pilots or flight attendants, security checkers, check-in clerks or even air traffic controllers. Many were laid off during the pandemic, and they aren’t anxious to come back.

The amount of understandable Covid relief that American and European governments poured into their economies to keep some measure of prosperity has resulted in so many available jobs, that it’s going to be hard to recruit those who had been laid off to return.

A great report on all of this aired this week on AlJazeera.

The Mideast is particularly worried, because its economies were not hit hard by Covid and their industries not considerably disrupted.

Emirates announced last week that it was simply going to ignore the UK’s edict to reduce flights. Remarkably, that’s exactly what it did! For the last week Emirates has landed its normal schedule of planes into Heathrow.

That’s not sitting well with the other airlines. On the other hand, I’m wondering exactly who’s being straight.

Many airlines couldn’t fly the planes even if the UK didn’t forbid them from doing so. They don’t have the staff. So they may be using the UK as their excuse. Then they might be turning around and criticizing Emirates for not following the rules.

It’s sadder in sub-Saharan Africa. The Biden administration has once again started the excellent collection of data regarding where Americans are traveling to, month by month. This doesn’t break down the travelers between vacationers, friends and family, business or government. So the raw data is somewhat hard to parse.

But my take on it is that while Europe and some of Asia and most of South America is ready to achieve pre-Covid levels of tourism, sub-Saharan Africa is not.

South Africa is better off than East Africa, but still probably around 80% of pre-Covid levels. It could be four times worse in East Africa, where I’ve noticed in the last several days remarkable deals as vendors cut prices to near Covid levels.

We’ll see what fall brings, but my gut tells me sub-Saharan safaris are in a serious decline from pre-Covid levels and something unusual or spectacular is going to be necessary to jump-start it.

So ironically if you’re going on safari, your chances of making it exceed the folks trying to enjoy a Rhine River Cruise!

Provided, of course, that you aren’t flying through Europe!