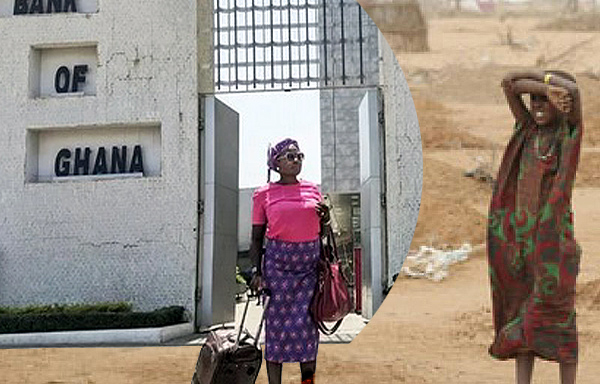 I think the world’s economic and social systems are collapsing. That probably doesn’t surprise you as an off-the-cuff remark, sarcasm probably cast out not too seriously.

Need I begin with the global catastrophes of the Ukrainian war, mass shootings and unthinkable assassinations, inflation back to Cold War levels, fascist resurgences and militaries growing like oyster puffballs?

I’d rather not. Those things don’t bother us, anymore.

Instead, let’s take a look at Ghana!

Ghana was Africa’s first colonial country to gain Independence. It’s a small, resource-rich, very developed African country. Between 1984 and 2008 it had such a wonderful economy that foreign investors flooded into the country.

Then the global recession hit – remember that? Probably you don’t, but it was rather severe in 2007/2008. Remember we had to give the airlines $40 billion dollars? And another $45 billion to the insurance giant, AIG? How we bailed out banks and investment firms and got GM running, again?

Yeah I know, with everything going on today it’s hard to remember all that…

Ghana might have been on the road to western splendor but it’s a small place. It didn’t have the wealth to bail out its little airline or couple insurance companies or handful of banks. So basically, Ghana failed. Defaulted. Went bankrupt.

The poor capitalistic world responded the same way to Covid that it did to the global recession: So much cash backed by Chinese collateral has now been poured into the world economies that all hell has broke loose: supply chains collapsed, inflation… oh, sorry, I’m talking about regular things, again. Didn’t mean to bore you.

So by the first of this year Ghana sort of ceased existing:

“Of 14 Ghanaian dollar bonds, 13 are trading with an extra premium of at least 1,000 basis points, a level considered distressed” to say the least, according to Bloomberg.

By February, “The current rigidity in the Ghanaian budget makes it impossible for the government to do anything without borrowing,” according to The Conversation. But “credit rating agencies have downgraded Ghana’s economy, [a] signal this sends to investors that Ghana’s sovereign bond is not profitable and its default risk is too high.”

The IMF offered to help. It’s customary for the IMF to glue back the smashed pieces of broken African countries. Usually they’re welcomed with opened arms.

But with inflation above 100%, many foodstuffs impossible to get, constant electricity outages and all sorts of other problems Ghanaians went politically crazy. Psychological and cultural movements require no capital infusions. A really super crazy government came to power with its search for slogans yet incomplete.

Ultimately they blamed past governments, liberalism, replace-ism and the West and The Banks, mother-in-laws and other deep-state infiltrators. So they refused the IMF’s help, because who knows, that lady heading the IMF was probably a mother-in-law.

Things got really, really bad the last two months in Ghana. Even having refused to take on new debt, paying its existing debt took 78% of its entire GDP. Tucking tail, the crazies had no choice:

“Ghana Goes to the IMF” was Foreign Policy’s July headline.

Now what? The IMF will give Ghana money for stabilization that it coerced from America and Europe that America and Europe got from China which is currently running out of money because it’s terrified of a sneeze so has shut its country down which means it no longer manufactures Kleenexes.

The other horror story doesn’t take as long an explanation.

Somalia is starving. There’s a famine ten times worse than the one you might remember in Ethiopia when rock and roll bands played concerts for it.

We’re talking about two million people dead of starvation by this time next year.

Back when music celebrities yoddled empathy there was also fortunately enough money for aid to buy food, which is what stops famine. Today, only 20% of what was pledged for the Horn’s famine by America and Europe has actually been paid.

Even with the cash, 20¢ on the dollar needed, NGOs can’t find food to buy! The Wall Street Journal explains that normally three-quarters of Somali’s grain comes from Ukraine, and … oh, sorry, I didn’t mean to bring up the ordinary things.