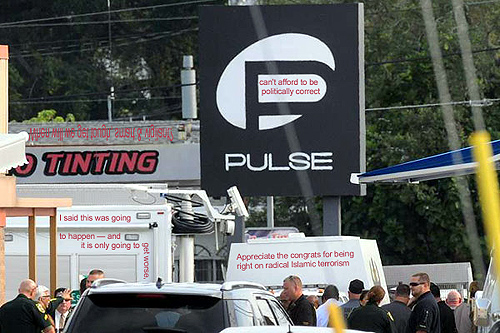 When asked if going on safari was safe my rejoinder has been, “Well of course it’s not as safe as Disneyland.”

Everything’s perfectly arranged: an angry son of an Afghan immigrant who most psychotherapists think is a closeted gay man; high-powered weaponry you can buy online; an obese anti-terror bureaucracy incapable of stopping carnage; wildly dancing happy go-luckies under a strobe deemed sexual deviants by local evangelists; and the icing on the cake: hated presidential candidates who know beyond doubt that their opponent is the cause.

Did you watch the Tonys last night? Not even close.

And everything that needs to be said already has, so all we can do is repeat:

Terrorism, or the probable hurt or disruption from terrorism is greater in America than anywhere in Africa. Some blanket generalization that you might employ to not travel to Africa because “it’s not safe” couldn’t seem more ludicrous than on this terrible Monday morning.

Your belief that terrorism is worse “somewhere else” is one of the reasons it’s getting worse. Terrorism grows on itself. It’s the cancer you’ll never have. Your denial is its chief accomplishment.

The most published news story in Africa about Orlando was by Agence France Presse: “With many victims of the carnage yet to be identified… Trump wasted no time in harnessing the assault to his political advantage.”

How does Trump “harness the assault?” With shortcuts like “Radical Islam”, “Political Correctness”,“Muslims”,“Weak Response:” buzz words that seem to relieve us of any responsibility to figure it out.

It’s so easy to exploit things which are difficult to understand like terrorism for political advantage.

“Americans have … willingly surrendered their civil rights because they are frightened,” writes a Kenyan today.

It’s easier for someone to get a high-powered weapon than food, Pope Francis told a convocation today.

These are very complicated issues that can undoubtedly help us understand and prevent terrorism. But you’re not going to get quick explanations at a political rally or on Meet the Press.

When deciding what world press agency would give the most balanced report about Orlando, the South African moderate newspaper, The Cape Times, chose the Chinese press agency Xinhau.

So the stage is set. The worst terrorism on earth at Disneyworld. Tickets now on sale.