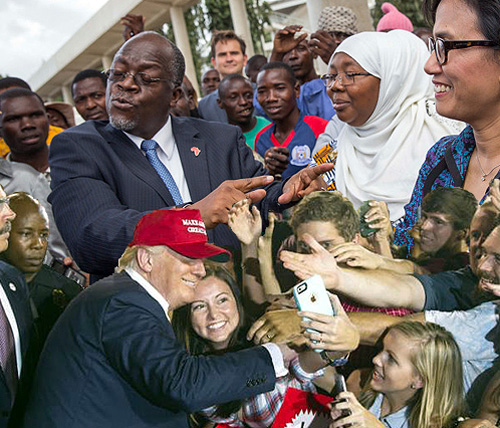 “Real Change” possible in Tanzania’s October elections makes me wonder if there’s not a democratic wave of discontent sweeping over the whole darn world.

Venezuela, Britain’s Labor Party (tomorrow), Guatemala, Ivory Coast, Turkey, even the Ukraine … the list goes on for some length: these are all places like the U.S. and Tanzania where very radical political change is possible this year.

Not necessarily likely, but possible in a way no one would have predicted a year ago. I for one think this round will be flat, but I think it heralds truly radical change the next time around: There are Elizabeth Warrens standing by in every corner of the world.

Tanzania is an excellent example of this “New Era” of change.

The country’s election is scheduled for October 24. Like most sane countries in the world, the campaign really only began this month. The candidates were picked in July, and they were about as surprising as Donald Trump running as a Republican and Bernie Sanders as a Democrat.

Tanzania’s political history for the last quarter to half century is very similar to the history of countries like the U.S. I hear laughter in the halls of academia, but hear me out.

I know Tanzania was a strictly socialist, even one-party system for the last era, hardly a political map of the U.S. But in the end these two radically different political systems really made very little difference to the millions of people they governed.

Since the end of the Cold War, there has been very little social or political change … worldwide. In fact in the U.S. we see racism and civil rights slipping backwards. The “voice” of the majority has grown increasingly weak.

The status quo held fast throughout this entire period: People in power – sometimes 30 or 40 years ago – stayed in power, or their children or the spouses took their places.

Almost all these leaders matriculated through the business world. There were few educators, scientists, laborers or even lawyers who ever held the reigns of power.

Capitalism was the bulwark of all policy. So it really didn’t matter if you were a one-party if autocratic politic like Tanzania, or a strict communist state like China, or a presumed open democracy like the U.S.: what mattered was profits and (financial) growth.

The Great Recession tolled the end to this mentality. It’s no wonder again that the U.S. was in the vanguard of change. But Barack Obama’s legacy turned out not to be ‘Real Change,’ as much as his supporters shouted it during his election.

The Democratic Party – which could have brought about Real Change – didn’t. Tanzania is going through that pivotal moment right now.

The ruling party, the CCM, has failed to meet the youthful aspirations of its electorate, and in an absolutely amazing coalition of ridiculously diverse opposition groups, UKAWA has mounted a real challenge for the first time in the country’s history.

But as with Obama’s election in the States, or Mursi’s in Egypt, or Erdoğan’s defeat in Turkey, I don’t think it will happen this time around.

For one thing, the UKAWA candidate leading the charge had expected to be the candidate of the ruling party he’s now contesting!

What we have is a moment in human political history where the pot is just starting to bubble.

Tanzanians, in fact, are asking their compatriots to heed the American rule that “one’s hand is expected to be extended to the winner in a congratulatory handshake after the polls results have been announced.”

The fear as in so many fragile societies is that defeat of ‘Real Change’ returns a status quo that is simply too unbearable. The bubbles in the pot boil and violence occurs all at once.

I’m less certain about Tanzania and the rest of the world than in the U.S., but I think this round of elections worldwide are bubbles in the pot, not the boiling over that brings real change.

But beware: A watched pot never boils. One ignored, explodes.