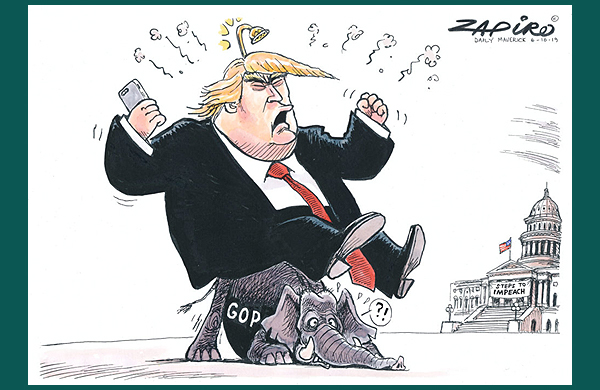 The cartoon above is not from the United States. It’s by Africa’s greatest cartoonist, Zapiro, published this morning in South Africa’s widest read, provocative daily media, the Maverick. And believe me Africa has plenty of news to poke fun at. So why does a prominent African newspaper poke fun today at Trump?

Because the world sees the end coming. I can’t completely buy into that yet, but what’s clear is whether it’s London, Buenos Aires or Joburg, the media is converging on the notion that Trump’s party, the GOP, will soon discard him.

…and that Romney will emerge as the GOP’s White Angel and end up challenging Biden in 2020.

Is this what you had in mind?

The old adage is truly appropriate: we can’t see the forest for the trees. We’re so anxious to get everything over and done, impatience fatigue, that we’re losing sight of a rather perfect plan for the 1% to stay in control.

A popular Kenyan media immediately republished yesterday’s Huffington Post article, the closest in the U.S. yet to outing Romney as the new GOP standard bearer:

“This is going to be the moment where Mitt Romney will play, I think, the decisive role in what Republicans do going forward,” the Post quoted a political operative.

Everyone is fatigued, and I mean everyone in the world. This month many events worldwide are coming to a head: Northern Syria abandoned by U.S. troops, Brexit, Impeachment, Hong Kong and in Africa, a critical breakdown in crucial talks between Ethiopia, Egypt and The Sudan on the future of The Nile.

Yet there’s a reason that Trump percolates to the top of the pile. America remains the most important country in the world, and one of the reasons — the hope it inspires in billions of people — is waning. People everywhere grasp for hope. So the clear vision the rest of the world has that the Trump era is coming to an end may just be a melancholic hope for the better days of the past, when America beamed the good word, the right way.

Or, it might be reality. The rest of the world – especially Africa – has much more interest in us than we do in them. There’s a value to that, especially when distant viewers from a variety of distant perspectives all begin to see the same thing.