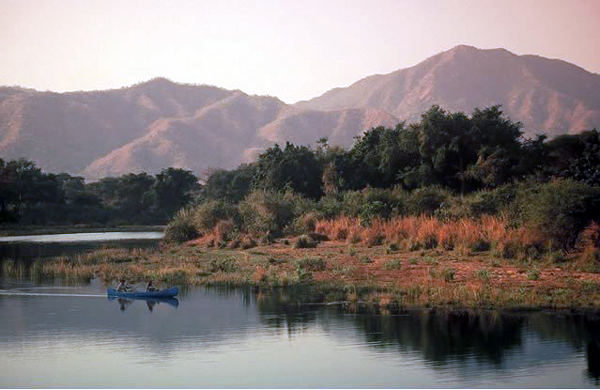 Next week the Zambian High Court might obliterate one of the last great remote wildernesses on earth.

One of the most difficult and expensive and pristine natural wildernesses in Africa is the Chiawa reserve on the Zambezi river in south central Zambia. After years of bribing, subterfuge and international challenges, this remote wild might be sacrificed for copper.

It was only about fifteen years ago that an airstrip large enough for tourism was finished and the area renamed the “Lower Zambezi National Park.”

It had been named the “Royal Zambezi National Park” from the days that European royalty hunted there. Today there are about a dozen camps and lodges in this now strictly protected area of nearly 5,000 sq. miles. No hunting allowed.

The area is very expensive to get to, because either outlandishly costly charter flights from distant places like Victoria Falls or Luangwa or few, multiple flights through Lusaka can get you there. Either way, it takes a long time, sometimes an overnight from wherever you are or are going to.

Because of this there are still very few people who visit the area relative to Zambia’s other wildernesses, like Luangwa and Victoria Falls. But it’s a real gem. The big game is extremely abundant and unlike so much of Zambia, much of the area was never hunted.

Unfortunately, though, the area is rich in minerals.

More than a decade ago the Zambian government designated about a quarter of the Chiawa reserve as a potential copper mine.

Immediately the civic leaders of the area banned together to protest the obvious implications. Their 2008 “Call to Stop Mining” elated foreign conservationists but there was a lot of self-interest unrelated to this remote wilderness and its big game.

The unanimous outcry by local citizens stalled the process, although more intense exploration and a number of access roads were newly built into the area.

In 2011 a group of UNESCO scientists condemned the possibility of mining in the area in a specially effective way. Across the Zambezi River from the Lower Zambezi National Park is one of Zimbabwe’s best national parks, Mana Pools.

In fact Mana Pools in its best days before the Mugabe catastrophe became an UNESCO World Heritage site. Scientists attached to the World Heritage program issued a “letter of concern” that if mining were opened in Zambia’s Lower Zambezi National Park, Mana Pools could be threatened and its UNESCO status revoked.

Finally in 2014 a group of local and international conservationists organized and paid by the embassies of the U.S., Norway and Britain, conducted an extensive survey of the proposed project.

The “2014 Evaluation report of opening mining in Chiawa” was to the point: “reject the project.”

The litany of catastrophes the report posited should the project be allowed to continue reads like a scifi apocalypse. Well, it did its trick. The heavy equipment was pulled back. The Australian mining company went over to Brazil.

In 2014 Zambia was much beholding to the U.S., Norway and Britain. They gave the country huge amounts of aid and had enormous influence. The Kangaluwi Mine seemed dead.

Local conservationists immediately went to court. The final decision will be rendered next week.

Today, in 2019, Zambia cares less about the feelings of the U.S., Norway and Britain. The levels of aid compared to 2014 have laughably tanked. U.S. influence, in particular, is effectively nonexistent. Conservation organizations, at home and abroad, have lost influence as well.

The global picture has changed. The players which used to defend the best parts of our planet in the most rational and fair ways, are gone. They’re fighting “fake news” and crying for Brexit. A little spot of pristine heaven in Africa is the last thing on their minds.

I’ll let you know what happens next week.