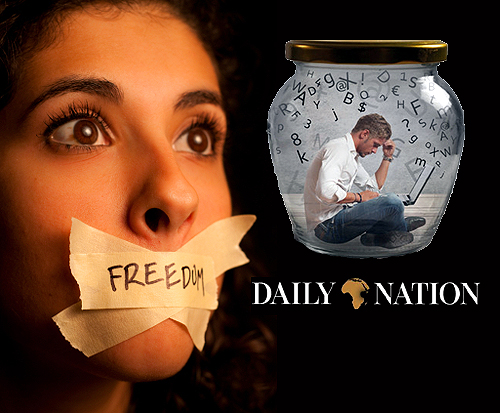 The Daily Nation Doth Protest Too Much and freedom of speech is redefined in Kenya.

January 1st one of the paper’s veteran editorial writers published an editorial summarizing 2015 in Kenya as a debacle wholly the fault of the President. Heavy on hyperbole, Dennis Galava mocked the president by continually introducing each criticism with a legacy term some consider offensive today, ‘Your Excellency’.

More germane: most analysts believe that 2015 was a relatively good year for Kenya.

Several days later Galava was sacked. He told one of South Africa’s most outspoken newspapers that he first learned of his firing by a friend in the Office of the President.

Criticism is OK, sarcasm maybe but mocking is definitely out of the question when it comes to free speech in Kenya.

Several recent laws and increasing government intimidation has slowly but surely clamped a valve on Kenya’s free speech. In line with trends in other emerging modern African countries, it is nevertheless troubling in Kenya where many of us felt the country had become a real champion of free expression.

The management of the Daily Nation claimed Galava was fired for not following established procedures.

The paper refused to comment on Galava’s statement to South Africa’s Daily Maverick that he had filed this editorial in exactly the same way he had filed the previous “100.”

That retort was republished in several other Kenyan media outlets including Nairobi’s most listened to radio station, Capital FM. The Daily Nation stuck to its guns and refused to comment even when asked by these peers in Nairobi.

Finally the paper issued a wimpy editorial several weeks later! Whining while lecturing their readers, the paper conceded public opinion was against them, but “Many of our readers do not seem to know the …purpose of an editorial.”

Hmm. And that purpose is?

“An editorial is the authoritative voice or opinion of the newspaper or news organization, not merely of the person who writes it.” Yes, Ok, anything else?

“Typically, an editorial is an opinion formed as a result of a consensus among senior editors..”

It took a few other platitudes before getting to the nitty gritty:

“It is supposed to be sober and dignified. It expresses an opinion without being opinionated, and it is never an occasion for name-calling.“

Calling the President “Your Excellency” is name-calling?

Kidding aside this is bad news for Kenya. Once the argument that restraints should be placed on media to protect the frailties of emerging societies might have been worthy of debate: My own first significant sacking was for submitting a report to my boss at UNESCO in 1972 arguing that a proposal to fund Sesame Street for the Cuban government was tantamount to funding government propaganda.

But today with an infinite number of portals into the worldwide web it’s pointless to think anyone or anything can control information much less public opinion.

And if his claim that the Office of the President knew he was going to be fired before he did is true, that’s serious censorship.

Kenya is feeling its way into the modern world, and frankly I think doing a very good job this incident excepted. Let’s hope it’s an exception: a very, very rare one. And separately, what a shame that the once glorious Daily Nation is no more.