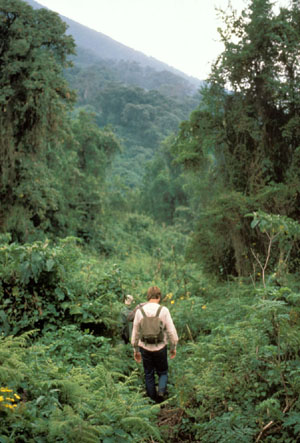 We left Semliki very impressed, but I put the chances of it ever recovering to the outstanding game reserve it once was as very low.

Monday night we were dumped on big time by a Ruwenzori thunderstorm when we were still 3k from the lodge and it was getting dark. Our second sundowner in the Semliki forest had been fabulous, and the orange-red sun setting like a perfect orb through the heavy mist of the Ruwenzori was unforgettable.

But even 3k in a thunderstorm in an open vehicle is not nice. Personally, I prefer the closed, top-goes-up vehicles of the sort we mostly have in Kenya and Tanzania. But I have to admit until a rain storm appears, I’m usually in the minority.

So we got to the lodge soaked through and through, but in less than a half hour everyone was back in the lounge, dry and ready for dinner. Steve Taylor, director of the zoo, was in his Sunday pants, and Steven Chaitoff, at 22 yet to be director of anything, was in a towel. But it became one of those memorable times on safari that we’ll never forget, carrying our memories well beyond the wet and rain to the amazing sundowner sunsets and great time in the forests.

If one is to believe the literature of the lodge, Semliki was once the greatest game reserve in East Africa. Quoting an old hunter, there were standard reports of the biggest most beautiful lion in the world. I heard a lion in the night, but I think the chances slim of ever seeing one here.

Semliki’s outstanding characteristic is its virgin forest which supports an avifauna which is really amazing. The lodge says there are 450 species, but our incredibly good guides said it was really closer to 800 if you include the actual Ruwenzori and sliver of Uganda that exists on the west side of some mountains in the Congolese jungles.

Steve counted 88 species in the two days, which is remarkable, and there were undoubtedly as many more again that we didn’t notice or record seen by our guides. And the forests themselves, mixtures of hardwoods, cactus, ferns, palms and hundreds of epiphytes, is a dream world.

But there’s a main road, heavily used, that cuts the reserve in two, the road from Ft. Portal to Lake Albert, and villages or quasi semi-permanent villages all along the way. There are fuming motorcycles and oil-leaking tankers. It is not the formula for reintroducing big game; it’s just not large enough given that road.

Wednesday morning some of the group went out again, and so more birds, while others went for a walk in the forest with the ranger. Doreen said it was “magical” and Roger was excited about having found chimp nests in an area that isn’t supposed to have habituated chimps. All testimony to the vibrancy of the forest.

After lunch we headed southwest through the city of Ft. Portal to our wonderful Ndali Lodge, where we’ll now be for two nights. It was an easy 2½ hour drive with a short stop in Ft. Portal, a busy, somewhat haphazard town with a deep history that it can’t seem to emerge from.

On the way we encountered – once again, it seems like everywhere – the Chinese building a new highway. And this will be no ordinary road. Everyone always challenges me when I say it will take more than two hours to go from Semliki through Ft. Portal to Ndali. Now they understand.

The roads serpentine on the edge of little mountains like curly hair, sometimes coming back on themselves. It provides spectacular scenery, but every mile the crow flies must be at least two or more on this road!

Tomorrow we begin our chimp trekking in the Kibale Forest.