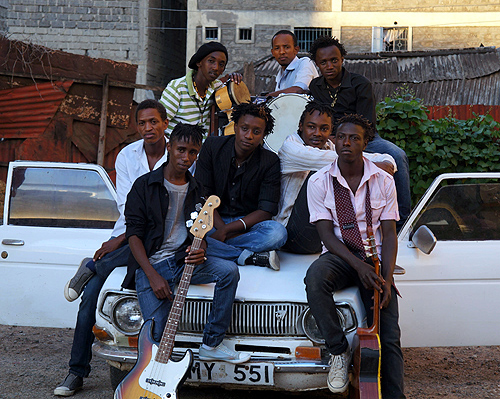 Throughout sub-Saharan Africa the now distant revolutionary “spring” is continued only by the youth’s music.

Movements for real reform heralded by the February, 2011 “spring” have all but disappeared. Governments that came to power then have turned autocratic defending security and ignoring reform, all in the name of “fighting terrorism.”

Music like the Kenyan Sarabi Band seems all that’s left of the original revolutions. These highly charged politically progressive art forms are massively popular … but I guess not popular enough.

Using the tragedy as justification, Jonathan ordered a full-scale military war in the north of his country, grossly exceeding his constitutional powers.

In Kenya the implementation of a new constitution in 2012 that was widely praised worldwide has systematically been eroded by the current government’s successful power plays hog tying the theoretically independent legislature.

Feeding tribalism like a hungry dog, President Uhuru Kenyatta has rewarded support for a whole series of small measures in the legislature that in sum hugely increases his own power. All in the name of fighting “terrorism.”

Sunday afternoon the country’s largest stadium was packed to capacity with cheering crowds that only slightly exceeded the number of armed policemen and deployed military. When the president arrived in his new “bullet-proof” presidential Toyota, the crowd went mad with applause.

But his increasing authority lets him pick and choose which laws to enforce. Sarabi Band’s hit song, Fuata Sheria, means literally “follow the law” and implores Kenyans to look back to the constitution, away from corruption.

The song approaches desperation. “Follow the Law” is historically hardly a revolutionary slogan, but in this case it is. It’s a plea to return to the idealistic values of Kenya’s youthful constitution, currently circumvented by most of its leaders.

Terrorism is not new, but these overreaching reactions to it were begun by America and now are being adopted by much of the developing world.

I don’t think they work. The reduced terrorism in America since 9/11 is short term. Jihadists and other revolutionaries work through generations, not decades. Successful efforts against terrorism are not as wholly militaristic as America has taught the developed world they should be.

Those all included military components, but negotiations that conceded power and social policy to the adversaries were more important.

In the still maturing and youthful societies of Africa, America’s approach to terrorism has fomented retrogressive moves to dictatorship and large losses of human rights for entire societies.

The old leaders are all back, and their corruption seems now vindicated as they legislate new authority for themselves to “fight terrorism.”