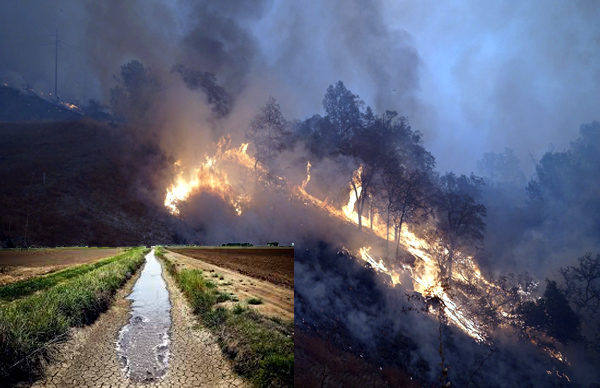 Gov. Brown understands better than anyone in America what Climate Change means: “Things like this will be part of our future … things like this, and worse,’’ he said yesterday of the fires ravaging his State.

And the people of Cape Town understand better than almost anyone in the world the prospect of running out of water. How they reacted to their prolonged drought, and how they managed it so well, is a model for all of us as we confront Climate Change.

After several years of intense drought Cape Town was running out of water. Droughts over Africa are not unusual, but the big ones normally occur inland. The meteorological explanation is pretty standard: droughts are rare along coasts with warm oceans like the Indian Ocean.

But that’s what happened with Cape Town. At one point the city’s water reserves were down to 3%.

They are now back to 70%, but an unusual October heat wave suggests a new drought might be on the way. Why is there not the panic that preceded the last one?

Because the city figured out how to get through it.

First and foremost is recognizing that this isn’t an anomaly, it’s Climate Change.

Second is the simple fact that mankind hasn’t dealt with Climate Change as scientists had asked us to years ago, and so listen to those scientists now about what to do next.

Third is to adjust personal behaviors. In the case of Cape Town that was reducing water consumption to less than 20 gallons per day per person. Compared to an American’s normal use of around 70-100 gallons, that’s a feat.

But even as the last drought ended and the rains pounded the city flooding it, Cape Townians stuck to their new conservation ways. Sisa Ntshona, chief executive of South African Tourism, told London’s telegraphthat the city definitely suffered tourism declines because of the widely publicized drought, but those tourists who came embraced water conservation and had very little disruption to their holiday.

Tourists were asked not to take baths only showers, to swim in tide pools or the ocean rather than fresh water swimming pools, and to flush the toilet as little as possible.

So now even as water levels have improved significantly, and as Cape Townians are restricting their water usage as a new behavior, tourists, too, are asking to continue to conserve.

“The Cape Town water crisis offers an excellent example of how consumption habits can change” for the better – for the long run as we confront Climate Change – according to Prof. Hamieda Parker of the University of Cape Town.

In fact Prof. Parker believes that consumers are the ultimate adaptation to the increasing hazards of climate change. Like many scientists she doubts world governments can now act quickly enough to ensure that past consumer behaviors can be sustained.

Fires are different than droughts. But both take away a necessary component of daily life from the consumer: water in Cape Town’s case, housing in California’s case.

So Cape Town has reduced its water consumption better adapting it to Climate Change. What should California do?

Reduce its housing in fire prong areas. It’s a simple corollary. It means not rebuilding Paradise.

The immediate impact of such a policy in California seems more dramatic than halving your daily water consumption in Cape Town. There’s also a dark implication that California consumers would be giving in rather than fighting as appeared to be the case in Cape Town.

But fire is more dramatic than water. Its effects are instant. And similarly, a proper policy of avoiding it provides complete success. No one will be asking the residents of Malibu to accept a lesser or smaller house in San Jose. So just get out of the damn fire zone.

Gov. Brown also said, “ “The chickens are coming home to roost. This is real here.”